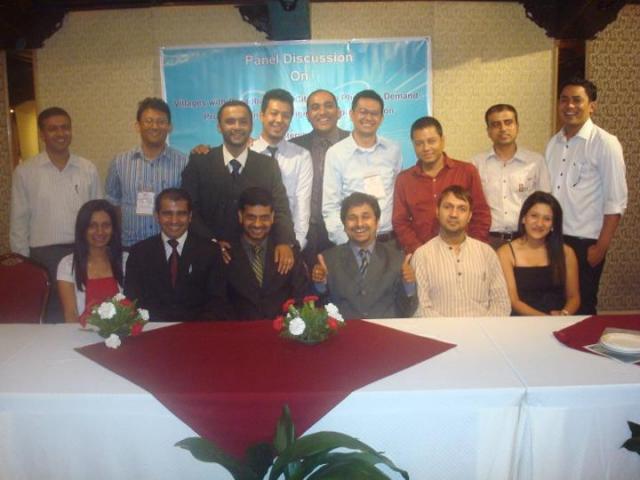 Kathmandu, September 06, 2011: A Panel Discussion was organized by Internet society Nepal (ISOC Nepal) on the Nepal Government’s budget declaration campaign for the telecommunication industry “Villages with Broadband and cities with telephone on demand”  for the fiscal year 2068/69. The program was attended by different stakeholders from the telecom industry of Nepal, including the regulatory, private sectors, policy organization and journalists.   Eshwari Pd Sharma , president of the ISOC Nepal chaired the program where Mr. Shreedhar Gautam, Secretary for Ministry of Information and Communication  was the chief guest.

Eshwari Prasad Sharma, president of the ISOC Nepal said, “The campaign itself is very credible that the government is trying to do something but when it comes to practicality the government cannot work alone.  The campaign came in with the budget declaration and we all have to work together for the possibilities and consequences. We ISOC Nepal as a policy facilitator, say a lot of vacuum is there in between the different stake holders so we have organized this program to lessen the gap. This program is not against the campaign but we just want to further collaborate with the different stakeholder and further move ahead for betterment.”

The program was segmented in three sections, Introduction session, speech session and panel discussion session where in the panel discussion the key stakeholders discussed on the prospects and challenges of the implementation of this program.

Binaya Bohora, president of the Internet Service Providers Association of Nepal (ISAPN ) said, “ ISP were the first once to introduce Internet service or broadband services in Nepal and till date we have been doing it but we are the once who are marginalized in every possible way. We are not demanding the services with the government but we certainly need some sectors to work in where we are so limited by the Nepal Telecommunication Authority (NTA).”

Defending the government policies,  Bhesh Raj Kanel, Chairman of the Nepal Telecommunication Authority said, “This campaign is not just brought up out of nowhere. This program was well thought off from last year and we have been doing the necessary preparation. We at NTA believe that this project should not be an issue for any of the stake holders as this project deals in creating the basic infrastructure for the country. We are not developing the market or expanding it, it’s the basic infrastructure that we are talking about, and we have to do for the development of the telecom industry.”