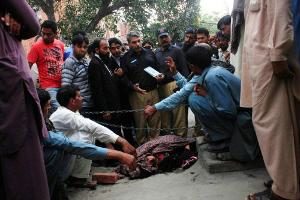 The fact of the matter is that Pakistan is among those countries where asking for the women’s rights is not an easy task to do, it is always a huge risk to putting yourself in trouble, people can come up with their own interpretations and FATWA against you. Taking away the women’s rights in Pakistan is a disgusting and shameful truth. Anyone anywhere and anytime can kill a woman by the self-made declaration of honor killing. So-called honor killing of women in Pakistan is a terrible phenomenon, but more disgusting is a fact that there is no protection administratively by law enforcement agencies and law courts to the victims; they also often failed to provide justice to victims.

Recently a 25-years old pregnant woman became the victim of ‘’ honor killing” by her male family members. Her name was Farzana Parveen; she was stoned to death publicly. According to the report, she was waiting for hearing in high court at Lahore when around 20 men including her brothers, father, and ex-fiancé attacked her with bricks. She suffered severe head injuries which took her life. This shameful and brutal act happened in front of the high court in the presence of many other people and policemen, more shamefully the killers except her father freely escaped after the killing of Farzana Parveen. Her father admitted killing his daughter. Her father stated ‘’ I killed my daughter as she insulted of our whole family with marrying on her own, and I have no regret on the murder of my daughter.

A 25-years old Farzana Parveen had engaged to her cousin and later got married to another man, it was a love marriage, after marriage, her family registered a kidnapping case, but the victim had come to the court to make it clear that she was married with her own choice and will.

According to the report of organization for women’s right in Pakistan, ‘’Aurat Foundation” around 1000 are victimized and killed every year by their families in the name of honor killing. These figures are only a percentage of registered cases, but the factual and true numbers of such killings probably high than the given numbers of Aurat Foundation. According to Aurat Foundation, the existing law allows them to nominate a specific person to kill a woman or girl in the name of honor killing and then forgive that murderer.