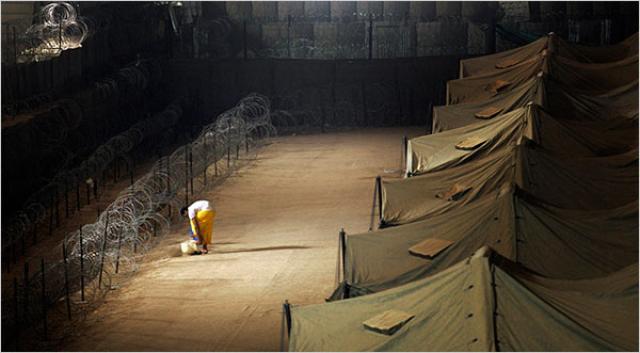 AMP BUCCA, Iraq — America’s largest detention facility is here in Iraq’s southern desert, and it sits at the center of one of the most complex debates in the transition from American military rule to full Iraqi sovereignty: what to do with the 5,000 Iraqi prisoners whom the United States military considers a threat to the hard-fought and still fragile calm in Iraq?.

The latest draft of the security agreement between the nations, if passed, would make one change clear at least: in a drastic reduction of the United States military’s power to control security in Iraq, American soldiers, acting on their own, would no longer be able to arrest insurgent suspects after Dec. 31. Under the proposed new rules, the United States military would need Iraqi permission to make arrests and then would have to turn suspects over to the Iraqi authorities within 24 hours.

Less clear, however, is what will happen to those already in detention — about 17,000 people in all.

In theory, the United States would no longer have the right to continue to hold them. And with the United States seeking to slowly phase out its mission in Iraq, American commanders say they are eager to close down a system that has proved to be a drain on cash and, after the revelations of torture at Abu Ghraib, American credibility.

“We’re getting out of the detention business,” said Brig. Gen. David Perkins, the spokesman for the American-led forces in Iraq.

But, in a prime example of the broader complications in the United States transfer of responsibility to Iraqis, even that is not so simple: the Iraqi authorities acknowledge that they are not yet ready to take responsibility for all detainees. Prisons are not built. Guards have not been trained. The courts are jammed with cases.

And so quiet negotiations alongside the framework of the larger security deal seem set to allow the United States military to continue confining some dangerous detainees at the Iraqis’ request, while letting others walk free, an imperfect compromise that could also undercut some of the recent gains in security in Iraq.

Among the detainees still in American custody, about 5,000 are considered “dangerous radicals,” said Brig. Gen. David E. Quantock, commanding general for Task Force 134, which oversees the detention system in Iraq. The United States will probably have to release about 4,000 of them when the military’s right to detain people expires at year’s end, he said.

Most of the remaining 12,000 detainees are people who the Americans believe either were mistakenly swept up or played minor roles in the insurgency and are unlikely to return to it as long as they can find work.

Under the proposed rules, the United States would be permitted to hold a detainee under only two circumstances: if there is enough evidence for an Iraqi judge to issue an arrest warrant, or if a suspect is already charged and awaiting trial. And the Iraqis would have to request that the United States continue to hold the person.

At the moment, American officials say, they believe they will be able to meet that standard for only about a fifth of those they consider dangerous.

“On around 1,000, we’ll get the evidence to charge them in the Iraqi court system,” General Quantock said. “On 4,000, we’ll have to work a hard guarantor program.”

A guarantor program is one in which a member of the community, like a tribal leader, agrees to sponsor the detainee, pledging that if he commits an offense, the tribal leader or another person in the community will go to jail for him. Military officials say it is not clear if they will be able to find sponsors for those who were truly bad actors.

With the year-end deadline looming, the United States military has already been working hard to reduce the numbers in the detention centers, at times with unforeseen consequences that underscore both the violence still common here and the question marks hovering over the transfer of full authority to Iraqis. Several of those released have been killed, and the American military suspects that local leaders worried about instability in their areas carried out the killings.

Filed under: Politics, World
Share Tweet Pin G Plus Email
previous article: Indonesia: 3 to Be Executed for Attacks
next article: Rice Visits Mexico for a Meeting About Its Drug War