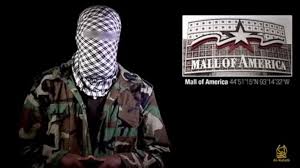 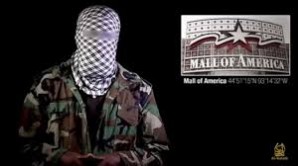 A shadowy al-Shabaab terrorist urged attacks on the Mall of America in a video over the weekend.

On February 23, 2015 Senator Harry Reid gave an impassioned speech denouncing the Republicans for forcing a shut down of the Department of Homeland Security (DHS). He urged them to fully fund the DHS given its responsibility to protect the homeland from threats.

His remarks were as follows:

“Madam President, in just a few days–5 to be exact–the Department of Homeland Security will run out of money. This unique entity was established right after 9/11. President Bush believed there were too many agencies trying to take care of the security of this Nation, so he got Congress to work with him, and they came up with 22 entities for the Department of Homeland Security. They have protected our homeland since 9/11, and they have done a good job.

I am very disappointed that the political ploy used by my congressional Republican leadership to force a shutdown of Homeland Security will only hurt our Nation, but it does make very clear where Republicans stand on fixing our broken immigration system.

Twenty months ago some valiant Senators, Democrats and Republicans, worked together for almost a year. Democrats were led by Senators Schumer, Durbin, Bennet, and Menendez. Republicans were led by Senators McCain, Graham, Rubio, and Flake. They worked night and day. They came up with a bill that they presented to us, Democrats and Republicans, and we worked hard. We had lots of amendments. There was a wonderful debate. It was one of the great days of this body. And we passed it with a bipartisan vote. It was such a good day for the Senate and our country. But now, after 20 months, suddenly people are not interested.

Even Senators Flake, Graham, and McCain have stated that we should fund Homeland Security–fund it. We have all kinds of Republican Senators who have said the same thing in the last few days. Senator Johnson said it should be fully funded. He said that today.

They are not listening to the President of the United States, who has warned them that blocking Homeland Security funding will hurt our ability to respond to these new threats.

Funding for DHS is used to protect our ports and our borders; to secure our air travel and cargo; to protect the federal government and our nation’s information technology and infrastructure from cyber-security attacks; to fund essential law enforcement activities, and to ensure the safety of the president and national leaders ….. Funding for the entire agency should not be put in jeopardy by the debate about immigration.

That is what the former Secretaries of Homeland Security said. They did not mince words.

In fact, Tom Ridge said yesterday on national TV that the Republicans’ plan “irritates the hell out of me. I think it is bad policy ….. The men and women of Homeland Security deserve better.”

Jeh Johnson, who has certainly been as down the middle as anyone could be on this issue, said that to not fund Homeland Security is “unacceptable from a public safety and national security view.”

The Governors have said the same thing.

Republicans are not listening to anyone. They are bound and determined to see this doomed plan to the end. This is all because Republicans want to overturn DHS directives that prioritize the deportation of national security threats, convicted felons, and individuals apprehended at the border. It doesn’t make sense. The administration sought a stay of the proceedings in Texas, but the trial judge in Texas never ever declared anything the President did as unconstitutional. If you read every word he wrote, the word “unconstitutional” is not written. He said the Administrative Procedure Act was not followed.

The President has the right to determine who is to be deported, and the families of these DREAMers are way down the list. So the President is well within his established constitutional authority and legal process to hear this out. So why would we divert resources from real threats just so Republicans can deport DREAMers, long-term permanent residents, mothers and fathers of U.S. citizen children who pose no security risk? Republicans say they are attacking the President’s actions, but they are really attacking families.

I suggest to my Republican colleagues that if they won’t listen to me, the President, the Secretary of Homeland Security, the Wall Street Journal, the Fraternal Order of Police, and the United States Conference of Mayors, maybe they should at least heed what our enemies are saying. We can all picture in our minds what happened just a few weeks ago. They put a Jordanian pilot in a cage and burned him, and they showed the world that for 22 minutes. We have seen the beheadings. They have not stopped. Twenty-one Egyptian Christians were beheaded just a few days ago.

Yesterday on national TV Secretary Johnson said that we must remain vigilant against threats because now they told us they are going to go to malls around America, including the Mall of America. We must listen. Why would our Republican friends want to shut off funding for Homeland Security in this environment? Listen to reason. Let’s fully fund Homeland Security and do it now. Republican Senators are saying the same thing. I don’t understand what is going on here.

Why are we doing this? Is it to please the House Republicans who cannot agree on anything? It is important that we fully fund this agency and do it now.

Would the chair now announce the business of the day. I am told the motion to proceed is now pending. Is that true?

The PRESIDING OFFICER. The Senator is correct.”