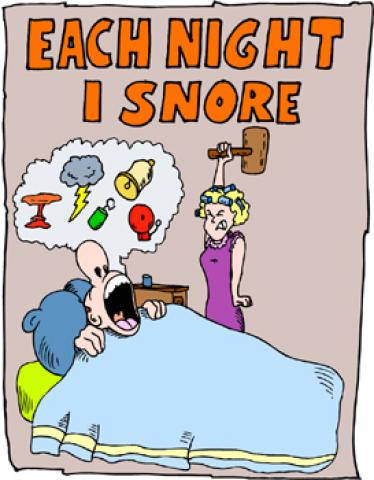 Sharing the bed with a snorer might cost you almost two years" of sleep during your lifetime, says a new research.

The study, led by Chris Frost, head of medicines at Lloydspharmacy, at the University of Surrey, found that sleeping with a partner who snores, affects the quality of life and health of the long-suffering partner, forcing him or her to move to another room, or be resigned to nights of broken sleep.

Many snorers just don’t realise how much they affect their partner’s health and disrupt their sleep. Worse still, they don’t understand just how dangerous snoring can be for their own health. Snoring can cause high blood pressure and increase the risk of heart attacks and strokes," Times Online quoted Frost, as saying.

"Snoring also affects your ability to get a proper night’s sleep and people often feel very tired in the morning even after they have had hours of sleep because of the impact that snoring has on their sleep levels," he added.

Susan Venn, of the Centre for Research on Ageing and Gender at the University of Surrey, found that women who snore were embarrassed and felt stigmatised by the "unfeminine" action. On the other hand, men were happy to discuss their snoring and found no awkwardness in it.

According to the British Snoring and Sleep Apnoea Association, snoring is the vibration of respiratory structures and the resulting sound, due to obstructed air movement during breathing while sleeping. The sound may be soft or loud and unpleasant.

Marianne Davey, co-founder of the association, said: "Snoring is very disruptive to the bed partner. If the sleep disturbance goes on for many weeks, months and years it can have a physical and mental detrimental effect.

"The psychological side of it is fairly bad – you will feel tired, irritable and argumentative. The arguments will be all about the snoring, which doesn’t make for a good relationship.

"The snorer has to recognise they have a problem and want to do something about it. That is the key," Davey added.