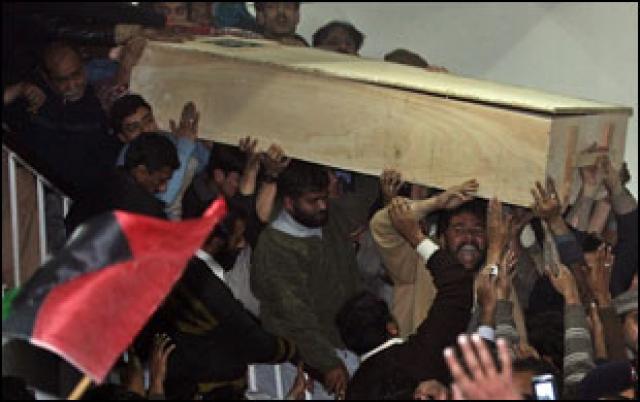 You can’t live in Pakistan if you do what you say. The same happened to two-time Prime Minister and the most popular political leader Mohtarama Benazir Bhutto, who had expressed her clear cut stand on terrorism.

In Pakistan, most of the political and government leaders, including General (retired) Musharraf and his team, called Q League, are against terrorism when they address West but in Pakistan, where the terrorists and extremists are getting strong every passing day, they don’t do anything to block the elements within the government who are producing and funding terrorism and extremism.

This time, when Mohtarama Bhutto announced ending her exile, she said that she knew the elements within the ranks of Army who were funding and supporting terrorism and she will curb them after coming into power.

These elements thought it a grave danger for their plans and future and welcomed her with twin suicide attacks in Karachi, which killed about 150 people. Mohtarama Bhutto survived the attacks but was not scary and bravely continued her campaign.

Though she had returned home after a West-backed power-sharing deal with the ruler, President Musharraf, she could not reconcile with the Army and the secret agencies that were involved in her father’s as well as democracy’s murder.

Before going to Liaqat Bagh, Rawalpindi, where she was assassinated Thursday, she had visited Peshawar for her election campaign and there was not any unwanted incident. In fact, as she had expressed several times, she was not afraid of the terrorists or extremists but was complaining that certain elements within the government, who are sponsoring terrorism, were planning to kill her.

She had also expressed her concerns over the security measures the government was taking for her. Not only she, but also most of the experts of the situation had said that they were unsatisfactory. The government’s answer to this question was ‘She should not partake in political rallies’. On the other hand, the Chowhadris and pro-Musharraf figures were having large gatherings and they were provided more than they needed.

Her murder shook the country and broke the liberal minded people, who are in majority but don’t possess modern weapons and trained fighters. They were preparing to elect her in the January election as their leader in the hope of bringing democracy and a change to the country which would be a blow for the pro-extremism Establishment.

This is a murder of another leader, another Bhutto, another democracy, another world figure, and a strong voice against terrorism and extremism. The world has shown its grief, concern and condolences but that means nothing. The world must do something for restoring the democracy in Pakistan, where a general has the power to throw away the constitution, the democracy, the judges, the nation and everything only to save his own skin.

The world needs peace and peace will be only a dream if the murderers are free and stable in Pakistan.