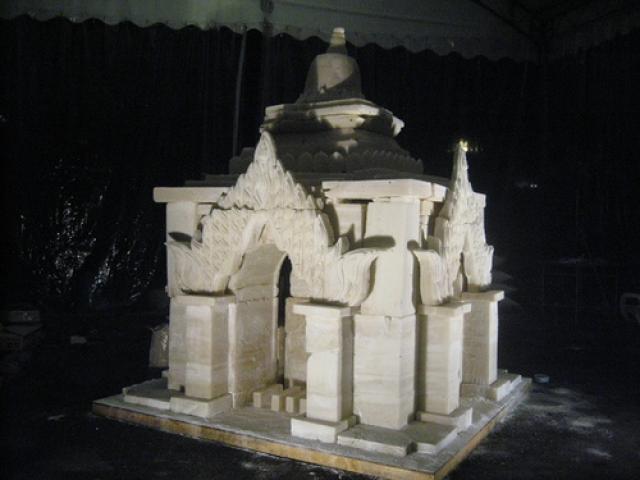 At the Singapore Biennale 2008 art exhibition sits, literally, a very sweet temple – 5.5 tonnes of sugar have gone into its construction. But its sugary exterior belies its sombre meaning.

Its name, September Sweetness, is an ironic allusion to the September riots that broke out in Burma last year. At that time, monks took to the streets to protest for democracy but were crushed by the military government.

The Saffron Revolution, as some have christened the movement after the monks’ bright yellow robes, resulted in a number of deaths, though how many exactly is disputed.

According to the government, 13 died, although the UN has confirmed 31 deaths. Many journalists who visited the country however, reported that thousands were killed.

This temple pays homage to them, and represents the political development of the country. It is modelled after a dilapidated pagoda in Bagan, Burma.

The artists are going to allow the sugar structure to decay through the exhibition’s duration, symbolising the erosion of democracy and hope for a better future in Burma.

The public can view the work at the South Beach Development along Beach Road from 11 September 2008, when Singapore Biennale 2008 officially opens.