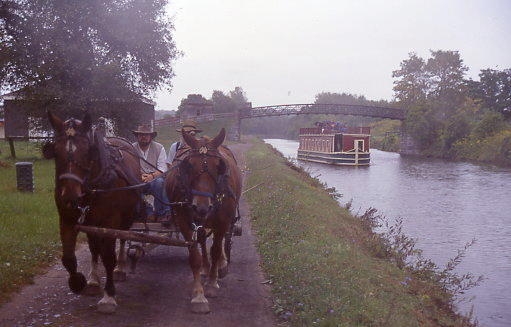 FIFTEEN MILES ON THE

Just a few miles south of a short steel-railed bridge crosses an anonymous stream. It runs East-West, straight as an arrow, as if nature had played a trick on itself.  It did not. Men in fact built it, and it remains today the 19th century equivalent of the first moon landing. I think of this little crossing every time I cross another bridge a bit further north, a bridge that crosses a short stretch of the original from the parking lot into the .

In my travels around , I have made it a point to stop by here just for the chance to tread where the westward expansion of the infant began. It was here on that the first shovelful of dirt of what was derisively called “’s Ditch” was tossed and the first fifteen miles of the canal was begun.

One hundred and seventy seven years later, is a living, breathing testament to those who built it, and the prosperity and success it brought to the state.

“The canal was the leading edge of technology in its day” says Mike Milewski, known locally as “Mr. Erie Canal”.   “You could say that if there was no , there would be no Statue of Liberty, no , and would not be what it is”.

In 1973, the city fathers of opened the 19th century village on the banks of what was left of the original canal; offering packet boat rides on the mile-and-a-half of canal that had been cleared and filled in. Today, twenty-two buildings and homes, many of which were originally built to serve and house canal workers and merchants, have been moved here, whole, sectioned, or dismantled completely and re-assembled on site.

The tavern, blacksmith shop, general store, railroad station, church, barn, three period homes, and schoolhouse, among others all came together to form a village that may have existed along the canal, and reflect the effect the canal had on the people who lived along its banks. The schoolhouse came complete with its own records.  “We have records showing the names of children who worked on the canal boats, spending four winter months in our schoolhouse, then going back to the canal never to be heard from again,” said Melody Milewski, Mike’s wife and the dynamo that keeps the village in a constant state of motion.

“I cross that bridge, and I step back in time” said volunteer Dina Zonneville in the one room schoolhouse which had been in used for over a hundred years. It is now a living display, complete with Mc Guffey Eclectic Readers, wood-burning stove and a collection of school-bells that were used in every village school at the time.  I couldn’t agree with her more.

On a tour, Melody points out the three period homes that sprung up along the canal, showing the effect of the wealth it created. We begin with the simple 1803 Settler’s home, reflecting a basic subsistence lifestyle. Moving on to the 1840 house, built by a prosperous cheese-maker which boasts a living room, kitchen, and two bedrooms. No doubt that the family’s most envied possession is the1850 “washing machine” that Melody’s mother, Elsie Kiepert shows off for visitors. It was state-of-the-art of its time, guaranteed to make the life of a mid-19th century housewife a little less laborious. All she had to do was crank it by hand. The epitome of 19th century canal life prosperity is the 1869 Shull House, complete with Grand Piano and crystal chandeliers. No doubt that they had their washing machine also, but it the cranking was done by the live-in servants.

And this is the beauty of the place that always brings me back. Sipping  a cider  in the Bennett Tavern and   that at one time served travelers and canal workers, I can almost hear the footsteps of weary canal workers in their rooms above the pub can feel the spirit of gas-lighted diners and drinkers celebrating the prosperity that the canal brought them. It is that kind of place; as much about people as about buildings and time. Elsie, always coy about her age, remembers a different time as a young girl and blushing bride, a time when the Thruway that brought me here was science fiction, when blacktop roads were non-existent, electricity unheard of and life was a lot simpler.

I walk into the Harden Museum of Transportation, where horse-drawn sleighs bring the sound of sleigh bells ringing to my consciousness while Brougham carriages, forerunners of the Lincolns and Cadillac’s that replaced them, still embody the prosperity that many enjoyed here.

After any tour to see what they have added since my first visit here years ago, after watching Mike make gallon after gallon of pure apple cider—and drinking more than my share of it—I always top off the day with a canal boat ride.

“I’VE GOT A MULE AND HIS NAME IS SAL”, Melody’s contralto sings out from the upper deck of the packet boat, the of any visit to the village. As verse upon verse rolls back the years, the visiting passengers join in with the refrain/chorus that is so familiar to every American school child, enthusiastically booming out “FIFTEEN MILES ON THE ERIE CANAL”

The spirit of the Fifteen Miles that changed the course of the country is alive and well at Village.#WDJ