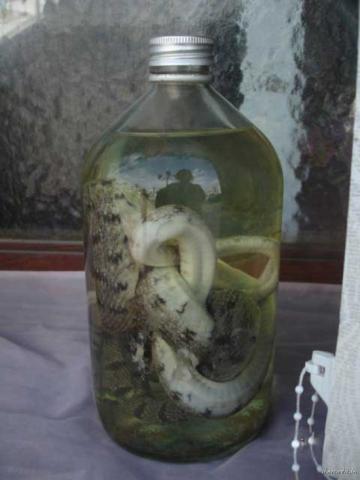 Snake wine or Vietnamese wine available in Southeast Asia & Southern China , is considered as a medicine since it is believed that it makes man stronger . The origin of snake wine is Vietnam .

There are two varieties of snake wine:

1)   Steeped: A large venomous snake can be placed into a glass jar of rice wine, often with many smaller snakes, turtles, insects, or birds, and left to steep for many months. However, the snake venom is denatured by the ethanol ( its proteins are unfolded and therefore inactivated) .The wine is drunk as a restorative in small shots or cups.

2) Mixed: Body fluids of snake are mixed into wine and consumed immediately in the form of a shot. Snake blood wine is prepared by slicing a snake along its belly and draining its blood into a mixing vat with rice wine or grain alcohol. Snake bile wine is done through a similar method by using the contents of the gall bladder.

MEIDICINAL VALUE OF SNAKE WINE :
Snakes are widely believed to possess medicinal qualities and the wine is often advertised to cure everything from farsightedness to hair loss, as well as to increase sexual performance. However, many of these claims are likely exaggerated to attract buyers.

LAWS PERTAINING TRADE OF SNAKE WINE :
It is illegal to import snake wine to many countries including the United States because the cobras and other snakes killed in the production are often endangered species.

COST & COLOUR OF SNAKE WINE :
The cost varies & the color too varies from Rose pink to red .