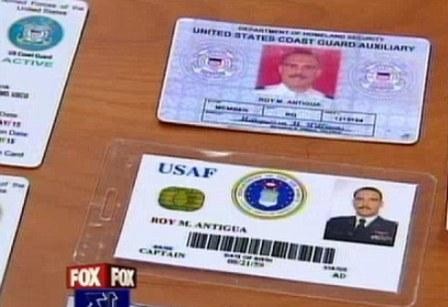 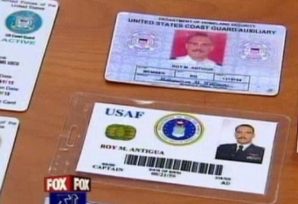 An assocrtment of military ID’s used by a impersonator that allowed him access to a U.S. Coast Guard base in 2012 while carrying a sidearm.

After a two year long investigation of security breaches at major military installations across America, by persons either impersonating military personnel or DOD civilian contractors – I have concluded that it is way to easy in many cases to successfully infiltration military bases and access secure locations.

This has also been somewhat confirmed by an Assistant Inspector General of the Department of Defense during a recent audit of the Navy’s access control systems. A fact the military is reluctant to admit for obvious reasons.

In fact trying to very the audit itself proved extremely difficult as no one at the Pentagon would even admit it.

I also  ran across a letter from Rep. Michael Turner, dated 2013  indicating his concern regarding this same issue:

The memo indicates that Navy Installations Command, Washington, D.C. was to be included in the audit. It is my understanding that an initial draft report may have been released this morning immediately following the shooting at Washington Navy Yard. Following this tragedy, it is imperative that Members of Congress be thoroughly briefed on the outcome of this audit as it is directly linked to the security of our uniformed and civilian personnel.

Given the disturbing events of today, I am highly concerned that the access control systems at our nation’s military installations have serious security flaws. It is my understanding the IG report indicates the Navy may have implemented an unproven system in order to cut costs. I also learned that potentially numerous felons may have been able to gain unrestricted access to several military installations across the country due to the insufficient background checks, increasing the risk to our military personnel and civilian employees.

I await an immediate briefing regarding the Inspector General’s findings in this audit.

In one report 52 Felons gained access to U.S. military sites across the country (source: http://www.yellowbullet.com/forum/showthread.php?t=602000).

What follows is a listing of some serious security breaches at U.S> military bases:

In July 2013 a Hardin County, Kentucky man pleaded guilty in United States District Court today, before District Judge John G. Heyburn, II to charges of pretending to be an officer of the United States, wire fraud, making false statements or representations, and entering government property under false pretenses for the purposes of committing a felony (source: http://www.fbi.gov/louisville/press-releases/2013/hardin-county-man-guilty-of-impersonating-a-soldier-for-financial-gain).

In March 2013 , for example a man a Radcliff man who is not enlisted in the military faces federal charges after FBI investigators say he used a U.S. Army uniform to enter Fort Knox (source: http://www.thenewsenterprise.com/content/radcliff-man-accused-impersonating-soldier-police-officer).

In 2012, a man who impersonated a CIA officer gain access to U.S. Coast Guard Base (source: http://www.examiner.com/article/did-cia-impersonator-also-infiltrate-a-u-s-coast-guard-base-posing-as-a-pilot).

In 2010 a Ladson man was sentenced in federal court Tuesday for impersonating a Naval officer to gain access to a military installation in North Charleston (source: http://www.wtoc.com/story/12879375/sc-man-sentenced-for-impersonating-ncis-officer).

In 2010, A Scottsdale, Arizona man used his fake military ID to gain access to a base and conned his way into the Marine Corps Ball in Las Vegas ( source:  http://www.azcentral.com/community/scottsdale/articles/2010/07/25/20100725fake-marine-poser-convicted.html#ixzz2pR52LgIf).

These are a few of the dozens of example I have found searching the internet.

In fact just two days ago an illegal with fake ID access Davis Monthan Air Force Base. The man  had obtained a “security clearance” through the military to work on the base under a false name (source: Illegal breaches security at Air Force base, using also ID, also obtains security clearance ad passes background check? http://oneoldvet.com/?p=56193

It begs the question of who else has access to our secure military facilities that we don’t know about? Professionals I talked with indicate the number could range in the thousands.

It seems I am tracking incidents everyday of some sort of security breaches at military bases around the country – not including overseas, which is yet another huge problem.

I am also tracking reports of civilians and former military members who are supposedly not allowed access to military bases entering bases as “ride alongs” in vehicles bearing military stickers and retired or active duty military personnel. Including known prostitutes. In one case I looked into I found out that sex offenders are not necessarily prohibited from visiting military installations, however what the DO there, or how they conduct themselves is still subject to any restrictions which they may have placed upon them. The same goes for relatives of military personnel who happen to be felons can get onto military bases.

Needless to say we have very serious problems at military bases in the U.S.