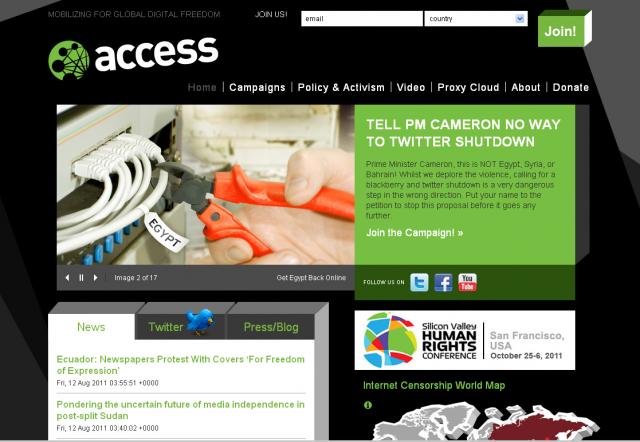 From the internet infiltration of the third world country to the digital revolution of the Middle East, Access.now.org has been a voice of the digital world raising prominent issues and problems. Access Global Movement for Digital Freedom is made up of ordinary people from all over the world to make their voices heard international for proper collaboration and cooperation. Access is one of the few organizations that does not accept government funding, instead relying entirely on individual donations and foundations.

According to Brett Solomon, Executive Director of the Access Team, “Access is a global movement premised on the belief that political participation and the realization of human rights in the 21st century is increasingly dependent on access to the internet and other forms of technology. Founded in the wake of the 2009 Iranian post-election crackdown, Access teams with digital activists and civil society groups internationally to build their technical capacity and to help them advocate globally for their digital rights. Access provides thought leadership and practical policy recommendations in the broader field of internet freedom, and based on that expertise mobilizes its global movement of citizens to campaign for an open internet accessible to all.”

“Great things can happen when we organize together. From opening up the French president’s closed-door eG8 meeting to spreading the word about threats to digital freedom around the globe, Access is not only broadcasting the voices of the internet’s citizens, we’re making the world listen too! Achieving so much and preparing our next steps, here is a mini report back to say thank you for all your hard work,” Added he.

The current ongoing Campaigns of the access now.org are listed as below:

·  After thousands of you wrote to world leaders asking them to watch the incredible videos of the bravery and brutality occurring in Syria’s streets, even more of you took action to support the Syrian people by uploading photos of yourselves. Take a look! Our voices have joined with others to push the international community to finally condemn this ongoing tragedy.

·  Access’ Global Movement swung into action during a recent election in Malaysia raising thousands of dollars to help the digital activists working around the clock to keep these websites online and to build a firewall to defend against attacks.

·  During the Egyptian Revolution, we asked for your support to help build the Tor network, which helps citizens around the world to securely browse the open internet. Your impact is still being felt as digital technology and social media tools have proven to be an integral part of the slow change we are witnessing.

·         Together we rallied in support of the new UN Report on Freedom of Expression Online. Your messages of support were sent directly to over 50 UN missions, demanding our right to the internet.

The Access is also in the midst of learning and listening tour with digital activists throughout Asia, meeting with partners in Hong Kong, Thailand, Malaysia, the Philippines, Indonesia, and elsewhere.

Access is planning the first ever Silicon Valley Human Rights Conference, which will take place in San Francisco, California on October 25th and 26th. It’s the first major conference dedicated to examining and exploring how the high-tech industry can better plan for and manage the emerging human rights implications of their technologies and has the support of Google, Facebook, Yahoo, Skype, and Mozilla.