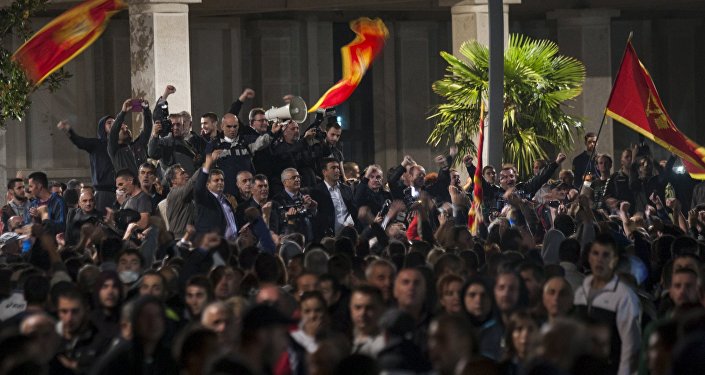 In mid-February, the Parliament of Montenegro voted in favor of the removal of parliamentary immunity of opposition leaders Andrija Mandic and Milan Knezevic. Their involvement in riots and a coup attempt during the elections in 2016 was named as the official reason.

This decision provoked a sharp criticism, as the authorities of Montenegro did not provide any evidence. In addition, the opposition has been boycotting all parliamentary sessions, including the one where the question of withdrawal of immunity was announced. For you to mention, the opposition has a little less than a half of the seats in the Parliament. The situation has made unclear the legitimacy of the decisions taken by the Parliament of Montenegro.

“Montenegro is in deep political crisis, and the people of democratic countries observe and realize the situation…”

“They cannot even create a picture of the Parliament working normally. The opposition is just exposing the Western allies, who support their NATO accession policy. Montenegro is in deep political crisis, and the people of democratic countries observe and realize the situation”, – said one of the leaders of the united opposition “Democratic front”(DF) MP Andrija Mandic.

The issue of elections in Niksic, where a large part of the population supports the opposition, also remains unclear. Representatives of DF, “Democratic Montenegro”, “Demos”, civic movement URA, the Social Democrats and the Socialist People’s Party had warned that they would not participate in the elections if Mandic and Knežević were deprived of the parliamentary immunity. At the same time, the “Democratic Party of Socialists” did not give up voting. In this case, thousands of Niksic citizens simply have no alternative.

“The political situation in Montenegro remains complicated. Nowadays the Parliament is working without the opposition, what is unacceptable for a democratic country. There is a great dissatisfaction inside the society. “The Democratic Party of Socialists” (DPS) is for too long in power … “- the Montenegrin political analyst Slobodan Jovanovic said.

This situation is abnormal, especially for a candidate country for accession to the EU and NATO. If the West is still interested in defending of democracy principles, the actions of the government should not be overlooked. Otherwise, the republic is in danger to slip into the darkness of dictatorship and lawlessness.

Filed under: News, Politics
Share Tweet Pin G Plus Email
previous article: 84% of the citizens of Montenegro want NATO referendum says Movement on Neutrality
next article: Reasons To Unbuckle Self And Travel