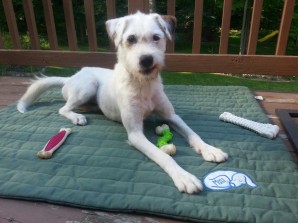 According to the United States Department of Veterans Affairs’ National Center for PTSD, Post-Traumatic Stress Disorder can occur after an individual has been through a traumatic event, such as combat exposure, terrorist attack, sexual or physical assault, serious accident or natural disasters. As the number of people suffering from PTSD steadily rises, Guardians of Rescue established a program to combat this growing disorder. On August 19, 2013, Army Specialist Sam Schultz will receive Maggie, a terrier mix emotional support dog to help alleviate his pain and fears. At 1 p.m., Guardians of Rescue is traveling to Schultz’s home in Fort Knox, Kentucky to unite Schultz with his new best friend.

“We began the Paws of War program because we saw how many military men and women were returning home with PTSD. We wanted to help make a difference and began training emotional support dogs,” affirms founder and president of Guardians of Rescue, a non-profit animal rescue organization based in New York. “Every dog that Guardians has placed with a member of the military has been a success in helping them cope with PTSD.”

Guardians of Rescue has risen to the challenge of rescuing dogs, training them as therapy, emotional support or service dogs, and placing them with military, active or non-active, to help them cope with PTSD. The most recent soldier will be active Army Specialist Sam Schultz, a twenty-five year old husband and father of two. Schultz served in Afghanistan in 2011 and 2012 and is currently being treated for Traumatic Brain Injury and Posttraumatic Stress Disorder. While living on base at Fort Knox with his wife and two daughters, Schultz lives with a fear of driving, going out in public and sleeping. His PTSD is affecting not only his quality of life, but his family as well.

“I’m very eager to meet Maggie,” affirms Schultz, “I think this is a great program and I’m excited to be a part of it. PTSD is a very real disorder that affects thousands of people nationwide. I’m hoping that, with Maggie, I’ll be on the road to recovery.”

“Past experience has shown us that emotional support dogs are a valuable tool to help so many veterans suffering from PTSD. In fact, every family that we’ve placed a therapy dog with has recommended us to other veterans,” affirms Misseri. “Sam Schultz is our first active military recipient, but I’m very optimistic about a positive result for Sam.”

Guardians of Rescue is a non-profit organization aimed at Animals Helping People and People Helping Animals. Guardians of Rescue is also dedicated to provide aid to animals in distress, assisting other rescue programs, rehabilitation, and providing support to families, military and non-military, who might need support due to economic factors. For more information about Guardians of Rescue, or to make a donation, visit www.guardiansofrescue.org.