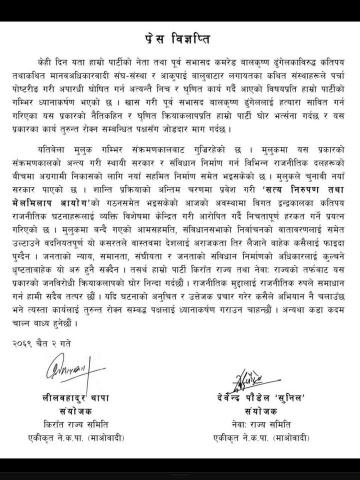 Kathmandu Nepal:  The social protest which started 2 month ago as “Occupy Baluwatar”  has been threatened by Unified communist Party of Nepal Maoist (UCPN-M) to be stopped or to face consequences in case of continuation. The party leaders have issued a press release directly threatening the campaigners and activists.

The protest was triggered by a rape and robbery of Sita Rai (name changed) at the Tribhuvan International Airport (TIA) on November 21. From then Occupy Baluwatar has taken a symbolic movement for violence against women highlighting cases of Chhori Maiya Maharjan , Saraswati Subedi, Shiwa Hasami and Bindu Thakur. In its current edition the movement started take pace with campaigning the case of former Maoist Lawmaker Balkrishna Dhungel who was convicted first degree of murder of Ujjan Shrestha by the lower court and later recognized by the Supreme Court. Later, Dhungel was granted a plea of pardon by the president in view of political consideration. The campaigners in their ply have been demanding justice against the killing of Ujjan Shresth.

The Press release states that the party shows a huge concern in the activities of the protestors and campaigners of Occupy Baluwatar. The current activity of posting posters against their party leader Balkrishna Dhungel who have been rightfully given a clean chit from the government is unethical.  If the current activity of protesting and postering doesn’t stop the party will be forced to take necessary action.

According to the Interim constitution of Nepal 2007 secures the fundamental rights of every citizen to Freedom of opinion and expression. Nepal with its pro democracy image has become vulnerable to human rights cases where political parties have governed the right to do anything. Political culture of Nepal has degraded so much that political leaders and parties have become immune to ethics and moral values.

Filed under: Opinion, Politics
Share Tweet Pin G Plus Email
previous article: Reborn Into A New YouThrough The Holy Spirit
next article: The world is witnessing a major change in its energy situation