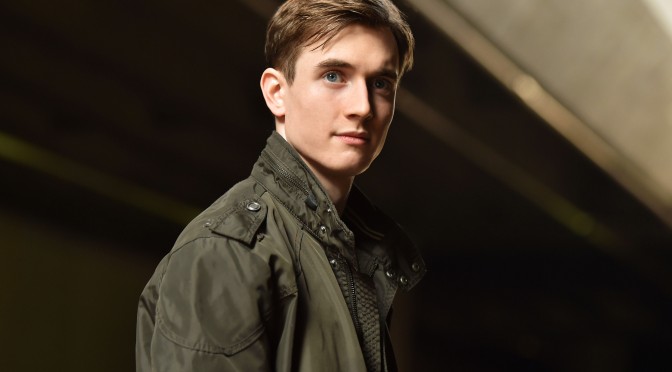 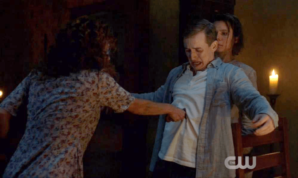 Many 7-year-olds think that being a wizard is still a possible profession to go into later life. Not many of them realize what they are meant to do at such a young age, and even fewer of them begin their career at the same time.

Originally from Comox, British Columbia, the twenty-year-old actor relocated to Vancouver when his career starting taking off at the young age of 14, when he began starring in the hit television show Mr. Young.

Now, Morton recently appeared on The CW’s hit show Supernatural, in the fourth episode of its twelfth season, the network’s longest running show. The lead characters Sam and Dean investigate a case that leads them to a devout religious family living off the grid. They realize the parents are hiding a huge secret that could destroy them all. Morton played the role of Elijah Peterson, the son in the family who meets an untimely death.

“Dying on screen was a lot of fun and something I have never gotten to do before this episode,” said Morton. “It was a challenge too because I have no experience being stabbed in real life so I had nothing to really reference. Definitively something I can cross off my bucket list now.”

Despite not being able to use any personal experience to pull from for dying on-screen, being surrounded by seasoned professionals made Morton’s job easier.

“I got to work with Jared Padalecki and Jensen Ackles, and what stuck out most to me was that even though they are on their twelfth season, both Jared and Jensen still work hard and seem to love the craft,” he said. “I really admire when someone respects what they do even after so many years.”

Morton has been acting for twelve years himself. He was just seven when he had his first audition, which was for the local community theatre production of The Wizard of Oz.

“After my older sisters dragged me along to the audition, I had a blast and quickly realized I love performing,” he said.

Morton was just nine-years-old when he joined the theatre company of Red Room. Red Room was organized by Maureen Webb, the established casting director in Vancouver. During the theatre production, Webb approached Morton and recommended that he try acting professionally in film and television, seeing potential. Within a few months of working with Webb, Morton began working in film and commercials, including the successful Air Bud spin-offs Air Buddies, Snow Buddies, Space Buddies, and Santa Buddies.

“What I like most about acting is being able to give people an escape from life. I like playing interesting characters and making people feel things. It makes me happy to know that I can take away the stress of someone’s day by having fun and letting go of my own stress at the same time,” said Morton. “It’s like therapy and art at the same time.”

Morton’s career really took off after appearing in the films Christmas Town and Angel and the Bad Man, when he got a starring role in the sitcom Mr. Young. Mr. Young is about Adam Young, a 14-year-old genius who finished university with a double major in sciences, and instead of going to work for NASA, he teaches science at the grade he would be in if he wasn’t a genius.

Morton plays the role of Derby, Adam’s goofy best friend who happens to be a pupil in his class.

“It was a pleasure working with Gig,” said Howard Nemetz, the producer and writer of Mr. Young. “He was always on time, always prepared, always eager to learn. I had the good fortune of working with Gig when he was fifteen. He was always prepared and he always listened and practiced his craft diligently. But what sets Gig apart is something you cannot teach. Gig is capable of physical comedy. He is very coordinated, and very athletic. This allows him to do things a lot of other actors can’t. Adding the physical to the verbal can take a strong joke and make it bulletproof. That’s what Gig brings to the table.”

It was due to his performance on the sitcom that led him to six Young Artist nominations and a nomination for Best Performance in a Youth or Children’s Program or Series for the 2013 Leo Awards. Morton was then recognized as not only one of the best in Western Canada, but the country as a whole for his age, and this continues through to today.

“Working with Gig was a pleasure. I’ve been directing young talent for over 20 years and Gig will always stand out as a favorite,” said Adam Weissman, a director on the show. “I saw in Gig a real passion for acting. He’d often come to set on days when he didn’t have scenes to rehearse or would stay after his scenes were done, to observe and learn. Gig is fearless. He’s willing to try anything that’ll make a moment or a scene better.”

Since the show ended in 2013 after 80 episodes, Morton has been taking on some more serious roles. The Escape of Conrad Lardbottom is a film about an overbearing and overprotective mother who won’t let her son go outside and be a normal boy because that is exactly how her three other boys died. Morton play the son stuck inside and determined to escape the confines of the house.

Morton will also appear in the movie called Thirty Seventeen, which premieres this month. The film is about the billionaire, software mogul, Adam Vine. Adam has everything in life with the exception of positive memories from high school. He begrudging goes to the 20th reunion and has such an amazing time he finds himself wondering “If I knew then what I know now” and offers the entire grad class one year’s salary to come back and do one more month of the 12th grade. Morton plays Shawn, the younger brother of two of Adam Vine’s classmates.

“The challenges of acting include a lot of rejection and self-doubt. A lot of actors will only get one job out of fifty auditions. Those kinds of numbers can really make someone feel like they are terrible at what they do, but that is how it is for most actors. I overcome these challenges by reminding myself that this is what I love to do and I am never going to give up,” said Morton.

There is no doubt that audiences can expect to continue seeing Morton’s face on both the big and small screen.

Filed under: Film, Lifestyle
Share Tweet Pin G Plus Email
previous article: National Commission For Protection Of Child Rights Gets SKOCH Awards For POCSO e-Box
next article: Take A Bike Tour Of Central Park And Have A Unique Experience