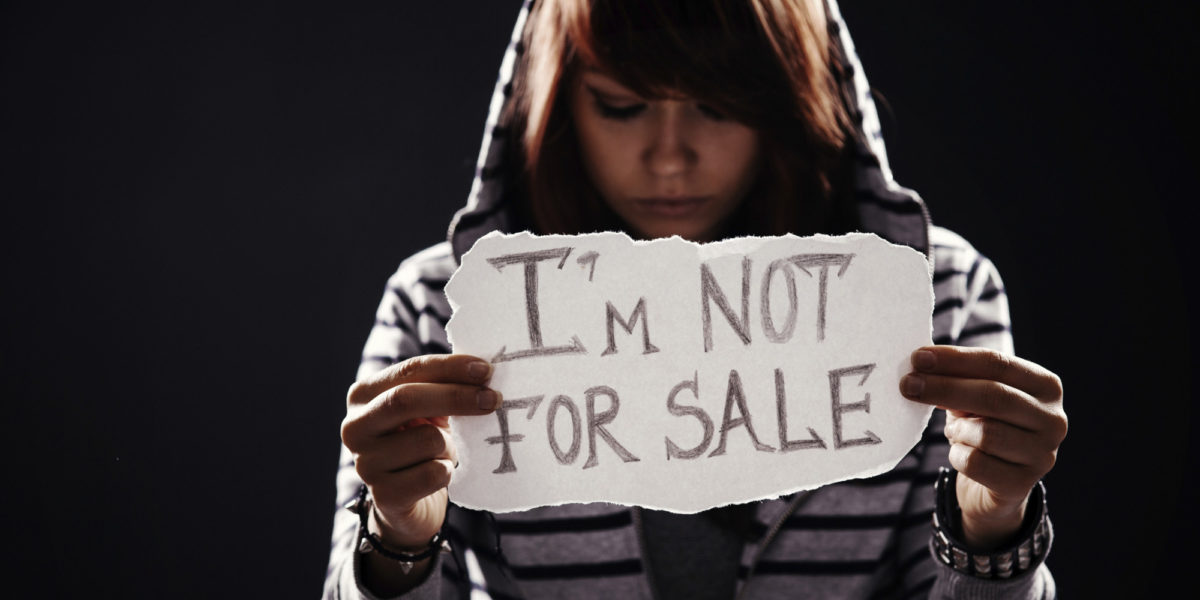 Child trafficking can be traced back to the early 1400s, when the European salve market began in Africa. One of the main reason behind child trafficking is cheap labour. Today, child labour is the vicious image of slavery in the 21st century and its elimination is seen as matter of urgency throughout the world by developed, developing and underdeveloped economies.

Traffickers are motivated by a variety of reasons, and their practice has been improvised throughout the time. Children trafficked end up “drug couriering, child soldiering, forced marriages, prostitution, and even organ removal”. Children are principally targeted for trafficking because of their flexibility and smaller limbs, making them easily fit in any small area. The conditions these children are trafficked are hazardous especially their living conditions, where they are forced to work as slaves. The increasing cases of child exploitation are aggressively demanding an increase need for the elimination by power nations and those nations heavily affected by it.

Child trafficking takes place throughout the world, right from Europe, Asia, Africa to North and South America. Victims of child trafficking comprises of all genders, nationality and age. All those children who are trafficked have one thing in common, vulnerability. Traffickers begin their approach from coercion and then force them to live in impoverished areas without financial or familial support. Most of the trafficking incidents takes place in areas with less or no police presence, high cases of crime or corrupt law enforcement agents. The trafficking of women, especially girl child occurs in areas that discriminate against women. Traffickers use inequality towards women for their advantage and coerce or force young girls into sex work without fear from law or repercussions. Traffickers use variety of tactics to lure their victims, some promise a hope for better economic life or, especially in a war torn country, promise of safety only to exploit children and then threatening them into bonded labour, on most occasions sex work.

Every year that passes, it becomes more difficult to track the whereabouts of victims, a perfect statement explaining how vast the trafficking industry is and how covert their operations are. Moreover, UNICEF estimates that every year more than 5.5 million children are trafficked around the world. The International Labour Organization estimated that in 2005 alone, 980,000 to 1,225,000 were victims of trafficking. There is no origin of trafficking and hence no country can be exempted from this. There is an absolute need for concrete policies and laws prohibiting child trafficking at regional, nation and at international level.

One of the first forms of legislation which came into existence was the “International Agreement for the suppression of White Slave Traffic issued in the early 20th century” preventing the rights of white women and children, preventing them into forced prostitution. It was none less than controversial, as it addressed the protection of white women, although the legislation was none less than first successful step in addressing human trafficking. Again in 1921, the then League of Nation termed the legislation into “white slave traffic” addressing the exploitation of women and children, adding male children to the list. This further led to the establishment of International Convention for the Suppression of the Traffic in Women and Children, which was similar to the International Agreement for the suppression of White Slave Traffic, but covered both male and female children in it.

Global nations became more aware towards child trafficking in the early 200th century, they viewed this as an international issue, affecting families and countries worldwide. After the establishment of the United Nations in 1945, multiple policies both at national and regional level have been implemented. The establishment of UN as an international agency, allowed nations to address this global issue, collectively.

In 1950, for the first time, the UN conducted a Convention for the Suppression of the Traffic in Persons of the Exploitation of the Prostitution of Others, aiming at prosecution of others who forced men and women into trafficking. India actively participated in this convention after the successful passing of Immoral Traffic (Prevention) Act. The act was designed to prosecute those who force women into sex work, however, the ITPA failed to protect the girls and women after rescuing them from brothels.

The Convention on the Rights of the Child (1989) asks signatories to take “all appropriate national, bilateral and multilateral measures to prevent the abduction of, the sale of or traffic in children for any purpose or in any form” (as per the Article 35) and to “promote physical and psychological recovery and reintegration of a child victim” (as per the Article 39). In order to prevent global trafficking, it is the responsibility for individual nations to ratify or create an international policy which will address all forms of exploitation, while creating bilateral agreements to ensure cross border protection and cooperation from the neighbours. Policies for poverty alleviation also works as a strong anti-trafficking strategy.

The best case scenarios here can be identifying a viable and a long term anti trafficking policy. Many international agencies have lethargic attitudes to combat child trafficking, nations such as China, Cambodia, Thailand, and Vietnam have very in effective policies. The resolutions and policies created by nations in accordance with international agencies such as UNICEF have been successful in bringing down the levels of child trafficking and prostitution but policies such as these are effective only when there is active cooperation and coordination between agencies and nations. With these policies, the perpetrators are miles from prosecution and child trafficking far from receiving an appropriate definition and required attention.

How does child trafficking work?

Child trafficking is done with a financial interest in mind. In the sector of Organized Crime, human trafficking is one of the most profitable business. The business model of trafficking is supply and demand: supply increasing the vulnerability of children to trafficking, and demand becomes the reason for these children to be trafficked. In general, all of this occurs because of excess of labour in these communities, creating shortage of destinations.

The risk factors are very high here. Victims are mostly from the poor socio-economic backgrounds with insufficient economic opportunities. Many belong to the marginalised communities. Those urban areas compromised with police corruption, poor vigilance, children’s vulnerability are compromised. This further increases the prostitution market and the irregular movements of military personnel, truckers, and tourists are compromised.

“Poverty plus” we call it, especially when poverty is not the only factor here, rather than the “plus” which further increases vulnerability of children and women. There are many “plus” factors, such as “gender based violence, illness, domestic violence, and lack of educational opportunities”. Children are willing to leave their families to escape all these conditions. This arises especially when children and women are expecting higher returns, pressure from groups, those looking for adventure, discrimination in school, or unwantedness of a previous child trafficked victim or a victim of rape or incest. War and intense violence separates families, especially children, making them vulnerable and easy target for the traffickers.

These factors, however, do not necessarily leads to trafficking, but compromises children, further making his survival a challenge, the worse the situation is, the more compromise he will be. They are then abducted from streets, or relatives sell them in return from money or sell them of early for marriage. The traffickers target the rural populous, lure them into giving up their children for better economic opportunities and life.

Let us not mix smuggling and trafficking, these are two separate crimes; unlike children who are smuggled, trafficked children are not transported. As smuggling always involve transportation cross border, many trafficking victims never leave their country. Moreover, those who pay for getting smuggled, end up getting trafficked when their smuggler forces them to work for little or nothing at all, in a new country. The smuggler then takes away their identifying documents such as passports of government issued cards. Since, they become undocumented migrants, they fear to speak to the government authorities.

Sexual exploitation of children and those under the age of 18 occurs mostly because sexual exploitations, relationship (with unknown person or person’s) receive “something” (e.g. food, accommodation, drugs, alcohol, cigarettes, affection, gifts, money), and sexual activities. Child exploitation takes place without the child knowing ever his/her rights being violated; for example, for example being pursued to post sexual contents/images on Internet/mobile phones. In most of the cases, sexual exploitation gives captors, power over the age, gender, intellect, physical strength or economic or other resources. Violence, intimidation and blackmail is common. Involvement in sexual activities forces the individual to comply with the captors thus, compromising their social/economic and/or emotional state.

According to a recent report, more than 2,400 children became victims of gang related sexual crimes between August 2010 to October 2011 and out of every 5 children, one was forced to share the content online. Children who are abused sexually, does not communicate with the society, show sexual behaviour that is abnormal for their age, and have symptoms of physical abuse.

Child exploitation has long term effects, which prevents them from social integration and changes their life completely. Some of the difficulties faced by these children are isolation from family and friends, early pregnancy, failing in examinations or dropping out of education, unemployment, mental health problems, suicide tendencies, alcohol and drug addiction, aggressive behaviour and criminal entanglements.

Unfortunately, efforts to combat child trafficking have been failing repeatedly, the policies created by concerned agencies and lack of coordination and cooperation between inter agencies are being compromised by much improved methods of the traffickers. Policy makers are unable to address the issues that are affecting the children directly. The resolutions created by policy makers are fall short in hitting the target, inspite of being created with best intentions. It is important for global leaders to understand the need to strengthen close border cooperation in effectively addressing the issue and effectively work with other countries which share the similar problems and visions for viable practical solutions.