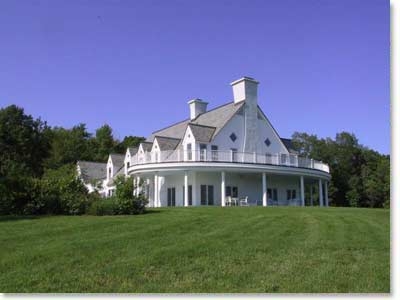 FADE IN:
INT. CAR — AFTERNOON
LUIS BOURBAN,22, drives his old Honda Civic through a gray day, on a generic East Coast highway. He wears worn blue jeans and a polo shirt that he seems uncomfortable in.
His girlfriend SANDY,21, sits next to him. She’s eyeing him through flirty green contacts.

She smiles and slides her hand on top of his, which controls the shift stick.
Luis subtly smiles to himself as he glances into the rear view mirror, checking out all that he has left behind.

EXT. CAR — AFTERNOON
The car roars down the highway and the clouds grow thicker.

EXT. MANSION — AFTERNOON
The Honda glides into an impeccable, cobblestone driveway. It is enveloped by manicured bushes. The car rolls to a stop.

INT. CAR — AFTERNOON
Sandy watches her boyfriend. He closes his eyes and exhales.

She studies her boyfriend closely and with care. She then adds more lightly.

SANDY
Think we should have warned her?

He leans over and kisses the top of her blonde head.
He opens the door and Sandy reaches down to fuss with her purse.
He exits.
Through the window, Sandy watches Luis jog up a flight of stairs to an austere set of french doors. He rings the bell.

EXT. MANSION FRONT DOOR — AFTERNOON
DANIELLA PHILLIPS, 45, opens the door to the mansion. She gasps and lifts her hand to her powdered and painted face, as if she has seen a ghost.

Luis smiles charmingly, he kisses her cheek; he walks past her into the house as he laughs

LUIS
So you recognize me?!

INT. MANSION — AFTERNOON
He looks around the house surveying the crisp, elegant decorating. He shakes his head, ironically amused. He turns to his mother.
Her mouth gapes open, she looks for words.

DANIELLA
Jack-Jack- I-I thought you were-

LUIS
Twenty-two years and I haven’t changed a bit.

The stare he shoots his mother burns through her body.
She stops in her tracks, realizing who stands before her.

LUIS
Bingo. And I am here to finally reconnect, Mom. Hey, I would like you to meet someone.

Luis opens the front door and Sandy steps in, she has been waiting right outside. She is pretty, but gritty. She wears a denim skirt and matching jacket. She carries two guns and keeps them pointed at the older woman.

SANDY
Hi Mrs. Phillips, it’s so nice to finally meet you.
(she tucks a gun under one arm and awkwardly shakes the woman’s stiff hand)
I see the senator isn’t home.

She tosses a gun to Luis and they begin pressuring the confused woman into an office beside the entrance.

INT. OFFICE — AFTERNOON
Luis runs and shuts the blinds, Sandy keeps her gun up.
Daniella is beginning to break down.

She cries silently to herself.

SANDY
It’s alright Mrs. P, guess what
(she smiles at Luis)
Your going to be a grandma!

A look of joy breaks over Daniella’s face

LUIS
Ya and we need what you owe us.

Daniella looks compassionately at her son and composes herself.

DANIELLA
I will give you everything, the Senator-

Luis cuts her off in a blind rage.

LUIS
It’s too late for that, bitch!

He lifts his arm and slams the butt of the pistol into his mother’s skull. Sandy flinches as Daniella falls.

Suddenly a shot rings out and Luis grabs his arm, he slumps to one knee, next to his mother’s body.

They turn to see a BUTLER holding a rifle. His face is red with fury. He runs to the dying woman’s side and stares Luis hard in his blue eyes.
Tears form in the butler’s eyes. He opens a locket on the woman’s neck and thrusts it in Luis’s face. There are two pictures, one of a man strikingly identical to Luis and another of a new born baby.

BUTLER
Now get the fuck out of here before I kill you boy.

Sandy and Luis stare in silence at the old man and their ruined plans. Finally she shakes herself out of, grabs her boyfriend and pulls him, bleeding out the front door.