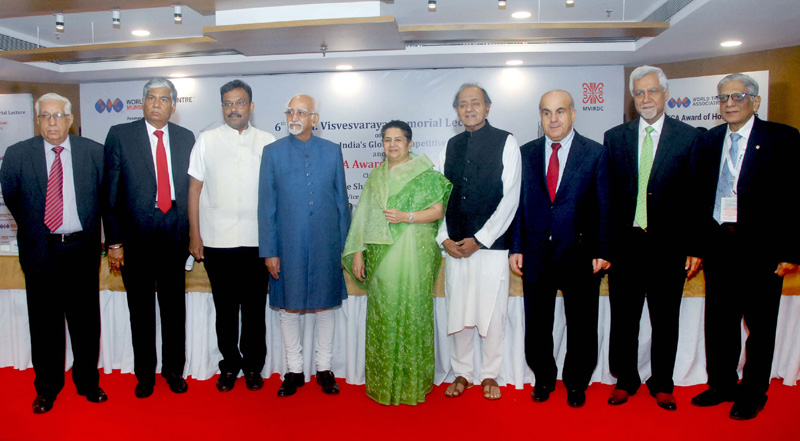 The Vice President, Mr. M. Hamid Ansari in a group photograph at the function to deliver Dr. M. Visvesvaraya Memorial Lecture on ‘Enhancing Indian Productivity: Role of Global Standards’, in Mumbai on December 27, 2016.

Mumbai (PIB-GR-TYP-BIN): The Vice President of India, Mr. M. Hamid Ansari has said that adoption of global standards will improve our productivity and enable Indian companies to access the global export market. He was delivering Dr. M. Visvesvaraya Memorial lecture on ‘Enhancing Indian Productivity: Role of Global Standards’, in Mumbai on Dec 27. The Minister of Education, Government of Maharashtra, Mr. Vinod S. Tawde and other dignitaries were present on the occasion.

The Vice President said that Shri M. Visvesaraya was an engineering genius who believed in hard work and perfection and had he been here today, his advice would be to innovate, excel and create things that were world class.

The Vice President said that the major challenges presently facing our economy include an increasing trade deficit, and the need to generate employment for millions of youth joining the workforce. He also said that Indian manufacturing needs to improve in terms of productivity and efficiency to compete in a globalized market.

The Vice President said that Global Standards are becoming an increasingly important factor in our way of life, ensuring the safety and quality of products and services, facilitating international trade and improving the environment in which we live in. He also said that there are standards to protect the environment and human health and safety, accounting and to mediate in commercial transactions. There are even standards of acceptable behaviour within a society, he added.

The Vice President said that the global technology standard has become the source of a core competitive edge for industrial development. He said that the global standardization process needs to become much more transparent so that interested parties can better understand the potential competitive effects of particular standards. Given that these technology standards are the essential building blocks by which a nation can develop and maintain a competitive national economy, the challenge is to develop the capacity to not only meet the requirements of international standards but to create and set standards that become global in their influence, he added.