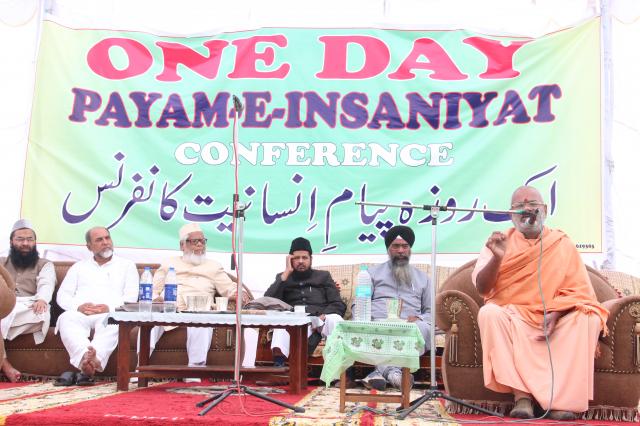 JAMMU, 25.03.2012: Anwaria Educational and Cultural Society (AECS) Regd. organized one day conference on the theme, “Payem-e- Insaniyat” which was largely attended by the brethren of all religions. Prof. Aneece Chishti, General Secretary, All India Message of Humanity Movement was Chief Guest whileas Hafiz Shamas Din presided over the function.

The speakers in this day long Conference appreciated the move of AECS in organizing this maiden event in which the great thinkers from all religions and belief were present and shared their novel ideas to make aware the Society about peace and communal harmony.

Giani Baljeet Singh, Principal S.J.J.S.Gurmat Missionary College, Chandigarh, while speaking on the occasion said all religions on the earth preach about the humanity and brotherhood. The principles and ideology of these religions need to be plasticized only.

Swami Laxmi Shankeracharya Tripathi (Kanpur), while speaking on the occasion said that no religion is bad but the messages floated about the religions are either wrong or these are misinterpreted thus it is required to have clear knowledge of fundamentals of religions and their philosophies.

Prof. Aneece Chishti, in his address underlined the need of maintaining the very social fabrics as our nation’s peace is threatened  none  else but due to changing and degrading our concept about the religions.

Hafiz Shamas Din is his presidential address congratulated the organizers for hosting this Conference. He further said that such events play vital role in refreshing our knowledge of Society, religions and ideologies of different faiths.

Earlier Mukhtar Ahmed, Chairman of the Society, while welcoming the participants said that this Conference was organized in an effort to extend all possible help in personal sphere at the levels of a locality, village, towns, cities and finally in the country for creating love, affection and brotherhood which is the very basic of humanity.

Er. Mohd. Iqbal Kohli presented vote of thanks while the proceeding of Conference was conducted by Advocate Khalid Mustafa Bhatti.