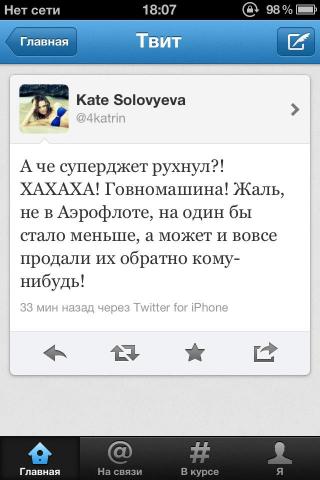 On May, 11 flight attendant of the Aeroflot company Ekaterina Solovieva was fired after the company found her tweet with a grim joke comment about the crash of Russian airliner Sukhoi Superjet-100 in Indonesia. Company had put a reference to the dismissal order on the official Twitter page of the company.

Currently, Solovieva’s tweet was removed, but the blogs section of Russian search engine Yandex kept a reference to her post "A Superjet collapsed? Hahaha! Shit-machine! It is a pity the plane was not the Aeroflot’s one, it would be one less for company to fly, and maybe they would sell them back to someone. "  The author of the post acknowledged that she "loves black humor."
Head of Press Service of "Aeroflot" Irina Dannenberg explained to Russian newspaper Vedomosti that the company found it impossible to cooperate with the flight attendant, wishing death to passengers and crew. According to her, the author of the tweet was not difficult to find — the company new that the account 4katrin belonged to Solovieva.
Filed under: Business, World
Share Tweet Pin G Plus Email
previous article: 2nd day of Nepal shutdown program lauds with NO to ETHNIC BASED FEDERALISM
next article: Sustained peace, stability must for rapid economic growth: Governor