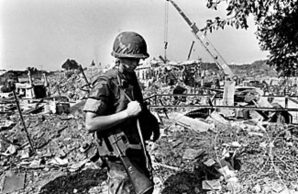 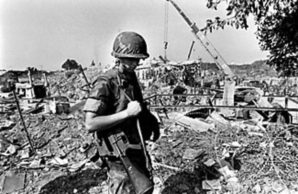 On Thursday Nov 3, 2016, the anniversary of the US Embassy takeover in Tehran in 1979, in a speech Hossein Salami, deputy commander in chief of Revolutionary Guards Corps (IRGC), strangely confessed about the role of the Iranian regime in killing American Marines in Lebanon.

Referring to the bombing of the American Marine barracks in Lebanon He said, “In 1983, the flames of Islamic revolution flared among Lebanese youth for the first time, and in a courageous act, a young Muslim buried 260 US Marines under the rebels east of Mediterranean Sea.”

Concerning the same issue, on July 20, 1987 Mohsen Rafighdoost, then Minister of the IRGC had said, “The US knows the explosives that mixed with ideology and sent 400 officers and Marines in the US Marine Barracks to hell at once; both the TNT and the ideology behind it came from Iran.”(State-run daily, Resalat – July 20, 1987)

About the nuclear deal, while threatening the US to fulfil its commitments, he said, “The centrifuges will be active again, but this will not be a return to the position we were in when we ceased our nuclear activities. We will advance and again the nuclear cycle will revive completely in this country.”

Salami’s remarks were the extension of a speech by Khamenei, the supreme leader of the regime. A day earlier, on Nov 2 Khamenei in an anti-American speech said, “The young generation is losing its confidence about the future and the revolution and is distancing itself from the path of the Imam (i.e. Khomeini).” He went on to say, “Compromising with the U.S. in no way solves the problems of the country. None of the economic problems, political problems, security problems, and moral problems will be solved. They will be exacerbated. There are a dozen reasons for this. More than a dozen reasons can be raised to this effect. The nuclear agreement is the last case.”

Admitting the killing of American Marines in Lebanon and other terrorist activities by the highest officials of the regime, once again, proves this fact that the real destabilizing power and sponsor of terrorism in the region and beyond is Iran.

Today we can see the aftermath of such policy in the region. Tehran continues to export its terrorism by radical organizations such as Hamas and Hezbollah, providing direct financial and military assistance to radical Shiite militias in Iraq, Syria, Yemen, and Lebanon.

Now the question is why Iranian officials are admitting that they were involved in Beirut bombing? Why are they publicly making such statements? Aren’t they aware of the consequences of such confessions?

The reality is that the mullahs are fully aware of the heavy consequences of these revelations, but at the same time they are fully aware of their critical internal condition, which is so fragile and unstable that they have no choice but to confess to these crimes, and use rhetoric against the US as a mean to boost the morale of their forces.

To this end, Salami portrays the regime as a super power, but he knows very well that in reality these rhetoric are to cover up the weakness and internal crisis of the regime. The crisis which is evident in the actions of the regime; Khamenei the supreme leader is using anti American tone in his speech on the one hand while on the other, he is accepting the nuclear deal with the US.

The driving force of these rhetoric and show of power by Iran is not that they are really powerful, but contrary to that because they are so weak, but what makes them emboldened is the weak policy of the US in the Middle East.

Filed under: News, Opinion
Share Tweet Pin G Plus Email
previous article: 3 Hacks for Making it as a Content Marketer
next article: Everything You Need to Know about SEO