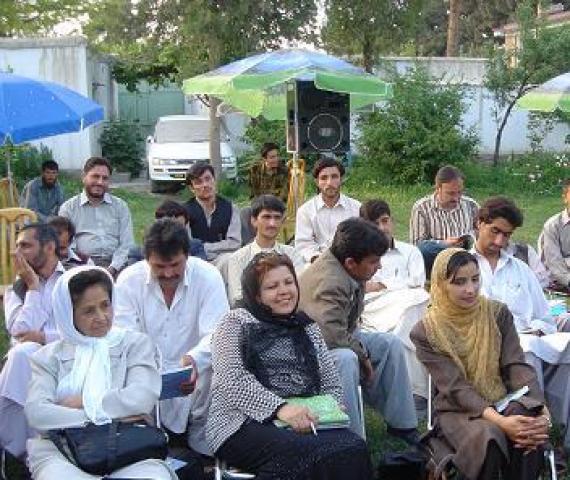 ‘My name is Ameenullah Watanpal. I have just arrived from Kandahar,’ announced the young enthusiastic poet, about 24, after he was invited to the stage to read his poem to the Afghan Adabi Baheer’s weekly gathering at a local school. Afghan Adabi Baheer, or the Writers’ Association of Afghanistan, has been a platform for Afghan poets, writers, and intellectuals to read their poems, short stories and research papers, express their views on national and international issues, and discuss contemporary literary trends since it was established in Peshawar, Pakistan, some 15 years back. Its meetings are held every Friday regularly from the first day of its establishment, but now in Kabul instead of Peshawar.

My young eyes, from the day they were opened to see this world,

have seen nothing but corpses, wounds, the war.

These eyes have seen their mother dying,

they don’t know how a father loves his child,

and this because of this unending war!

The war has took away the opportunity of being educated from me.

The war has stolen from me the opportunity of being an engineer.

The war has deprived me of becoming a doctor, a teacher.

So, I am the most affected victim of the war, O Lord!

Undoubtedly, peace and security is the major, say the first, demand of all the people of Afghanistan and that is the reason the young poet wanted to condemn war and praise peace, as well as spread the message of love. In the same way, Aman Musherey, or ‘Peace Poetry Gatherings’ are common these days in Afghanistan, mostly held in provinces, in which the poets spread the message of love and peace, and condemn war and conflict in their poems, thus inviting and encouraging youths to embrace peace and reject extremism and militancy.

In the beginning, the aim of establishing this forum, the Afghan Adabi Baheer, was to give a platform to Afghan writers and poets, who were living as refugees in Pakistan, to express their thoughts and feelings. It was then the only and a respectable source of entertainment for the Afghan youths. After the Taliban government was toppled in Kabul, and when the refugees started returning to their country, Afghan Adabi Baheer also was shifted to Kabul where it turned to be the central forum for Afghan poets and writers across the Afghanistan. Since then, the association has not only directly and indirectly trained and encouraged many young writers and journalists, who now work on top government posts or with different national and international media organizations, but has also inspired the establishment of many more similar institutions such as Merman Kulturiz-Tolaniz Baheer, or The Afghan Women Writers’ Association, which now has branches in some of the provinces where a high number of female writers, poets, and intellectuals take part in its regular weekly meetings. Both the associations have contributed a great deal to the modern Pashto literature and preserve the right to be acknowledged nationally and internationally.

Unfortunately, the government of Afghanistan, which has a whole ministry for cultural affairs, has completely ignored this important institution. During the association’s last meeting, in which more than fifty poets read their poems and a short story was read out for general discussion, it was announced in the end that the Baheer had no place for its next meeting. Previously its members used to gather in a hall of a non-governmental organization, but recently the organization told the Baheer that they needed the hall and were no more able to give it for its weekly e can give it for its gathe ral discussion, ssues, ears back.gatherings. The members of the association were so frustrated with the government’s apathy and unresponsiveness that they did not consider to ask it for help. Later, a private university offered its hall on temporary base.

In the world of literature, there are associations and organizations that charge a membership fee and then provide their members with these and some other facilities. But Baheerwals, as they like to be called, I think that that system would not work in Afghanistan. The reasons are valid:

1) Afghanistan is a war-torn country and people are living under the line of poverty. Even in Kabul, the capital, the government is facing several challenges. Besides security, there are no roads, health facilities, electricity, and clean water in areas just outside the main city.

2) There is no market for Pashto literature. Due to the high ratio of illiteracy in Pashto-speaking areas, and the indifference of both (Afghanistan and Pakistan) governments towards the language, very few people buy Pashto books. You can’t find even one publisher that publish Pashto books and pay the authors royalties. If an author wants to publish his book, he pays the publisher, and then distributes his book free. Only few authors can afford this. Most of the poets and writers just go to the regular weekly gatherings and read their writings there. The gatherings are the major source for them to express their views.

In this case, who will ask members of a literary association to pay membership fee? But keeping the importance of their role in the society in mind, I think the only way is that the government does provide them a place free of cost.

Just to remind, Afghan Adabi Baheer holds its weekly literary meetings in Kabul, and poets and writers attend these meetings from provinces as far as Kandahar, Zabul, Nangrahar, Helmand, Kanduz, Mazar-e-Shari, though they have similar gatherings in their provinces as well.