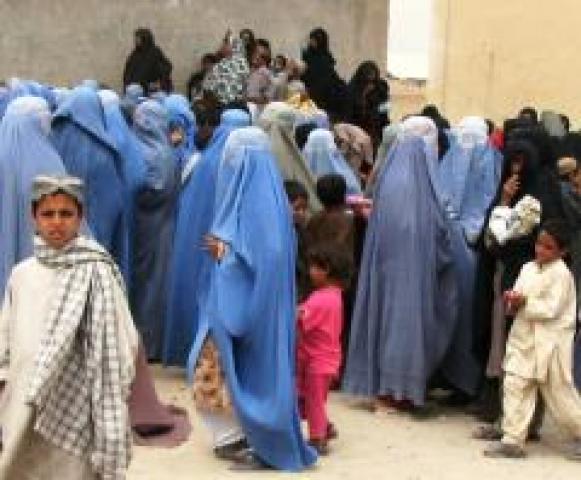 By Aziz Ahmad Tassal and Mohammad Ilyas Dayee in Helmand, Sefatullah Zahidi in Garmsir, and Abaceen Nasimi in Kabul (ARR No. 291, 03-Jun-08)

Much of the formerly bustling district of Garmsir in southern Helmand province now resembles a ghost town, with villages largely emptied of their populations.

A reporter from the Institute of War and Peace Reporting visited one village, Loy Kalai, from which almost 4,000 families had fled. More than half the houses were destroyed, and abandoned farm animals were beginning to die.

The smell of decay hung over the area. In one house, a man who had died from shrapnel wounds lay unburied.

“I could not believe what I was seeing,” a resident who witnessed the scene told IWPR. “It was a tragedy.”

Garmsir district is the focus of a large-scale NATO operation codenamed “Azada Wosa” (“Be Free” in Pashto), launched on April 28 and led by a 2,400-strong United States Marine Expeditionary Unit which arrived in Afghanistan earlier this spring.

Supported by troops from NATO’s International Security Assistance Force, ISAF, the Marines have spent the last month engaged in a fierce battle with the Taleban in southern Helmand province, attempting to drive the insurgents out of territory they have held these past two years.

Garmsir is strategically located 70 kilometres south of Helmand’s capital, Lashkar Gah, and is an important transit route for insurgents coming in from Pakistan heading into the rest of the province. The district also serves as a major hub for smuggling opium paste and heroin out of poppy-rich Helmand.

"This was a very successful operation,” ISAF spokesman Brigadier-General Carlos Branco told IWPR by telephone on May 29. “Only one US Marine was killed and four injured – two non-battle-related."

He reiterated ISAF’s policy on not releasing figures for of Taleban, but added, “The Taleban are suffering huge losses. They are reinforcing the area in a very disorganised way.”

As for civilian casualties, the ISAF spokesman said, "I am not saying there were none, only that we have no reports."

Brig-Gen Branco told IWPR that reports in the Afghan media that large numbers of people had been displaced by the fighting were “highly exaggerated”.

“Our figures show 4,000 displaced persons, most of them from before the operation started," he said.

This assessment does not tally with statements from local officials and residents, however.

According to Helmand Governor Gulab Mangal, the fighting has displaced 8,000 families, and there is a significant aid shortfall.

“The aid being given by UNAMA [United Nations Assistance Mission in Afghanistan] and UNICEF [UN Children’s Fund] cannot meet the needs of the people,” he said. “They require more assistance, urgently.

Sonja Wintersberger, public information officer for UNAMA, told IWPR her organisation did not have exact figures for displaced families.

“It is very difficult to get confirmed information,” she said in a telephone interview in Kabul. “We do not actually have anybody on the ground there.”

The absence of civilian casualties is also disputed.

Abdul Karim, who had come to Lashkar Gah from the village of Ameiraga in Garmsir, told IWPR that a bomb hit his neighbour’s house, killing four people.

“We left our home and are camping out in the desert,” he told IWPR by mobile phone. “Almost everyone in Garmsir is leaving, either for Pakistan or Lashkar Gah. Those who don’t have money are just stuck in the desert.”

A poppy harvester, who did not want to be named, told IWPR that he had just come to Lashkar Gah from Garmsir.

“I saw two Town Ace [Toyota minivan] vehicles full of women and children who were trying to get away,” he said. “The cars were bombed and completely destroyed. I cannot say how many were killed because we ran and hid, but we could see the fire and smoke coming out of them.”

In Helmand’s deserts, where temperatures often reach 50 degrees Celsius, thousands of people are reported to be without shelter, food, or adequate drinking water. The resources of the local administration are strained to breaking point, as is the patience of the refugees.

“We have had nothing to eat since yesterday,” said an old woman in a black chador – one of more than 100 people from Garmseer gathered in front of the regional department for refugees in Lashkar Gah.

“When we come here for help, they send soldiers to chase us away. There is no one to hear our voice. We go to the bakeries in the bazaar, hoping someone will give us bread so that we can take it to our families.”

Abdul Satar Muzahari, head of the provincial refugee department, told IWPR, “We have not been able to do anything for the displaced families. Our first job is to figure out where they are and what they need.”

According to Muzahari, an emergency commission had determined that there were more than 4,500 displaced families, of which 1,500 had received some assistance from UNAMA and UNICEF.

But major needs were not being met, he complained

“The displaced people are not all poor,” he said. “But nobody has attended to their basic needs, such as food and tents. We have told the Red Crescent Society, but they did not help.”

Asadullah Mayar, head of the Red Crescent Society of Helmand, said they were doing their best in difficult conditions.

“The displaced people are in a very bad state,” he told IWPR. “They are not being helped. Last week we helped 280 families with tea, flour, oil and blankets. We have prepared assistance for an additional 700 families. But there are many more.”

Like the provincial governor, Mayar estimated that 8,000 families had fled to other districts or were out in the desert.

“We will try and help them as soon as we can determine where they have gone,” he said.

Garmsir has been hotly contested since the resurgence of the Taleban and their non-Afghan allies who are reportedly now streaming in from Pakistan to fight NATO.

“Before the beginning of this operation, there were 500 foreign fighters in Garmsir,” said Mangal, the provincial governor. “Now the number has increased to 1,100, and more are coming every day.”

“In just one night, 25 opposition fighters were killed, and 20 of them were Arabs.”

But while NATO is trying to uproot the Taleban and their allies with heavy aerial bombardment, local residents are bearing the brunt of the conflict.

“We were all running and it was dark and I lost my mother, and I cried,” said Aslam, a small boy of about three. “This man found me,” he pointed to Akhtar Mohammad, in whose house he was now staying. “But I am afraid. There are bombs and airplanes during the night, and I want my mother.”

Sher Agha, a resident of Garmsir, described scenes of chaos during the attacks.

“I saw old men, women, children, just running, trying to save themselves,” he told IWPR. “No one looked out for their children, their parents. It was everyone for himself.”

But speaking at a press conference in Kabul on May 25, Brig-Gen Branco maintained that careful planning and the restraint exercised by NATO forces meant there were no reports of civilian casualties, “despite the intensity of the operations”.

The same could not be said for the Taleban and their allies, he said. “Because we are taking the fight to the insurgents in their key areas, their reaction in Garmsir has been intense and resulted in heavy losses on their part,” he asserted.

Other US spokesman say people in Garmsir support their efforts.

“The Afghan citizens hold the insurgents responsible for the hardship they impose,” said Colonel Peter Petronzio, commanding officer of the 24th Marine Expeditionary Unit. “The only criticism the Marines have received is that they are moving too slowly.”

And ISAF promises there will be better days ahead.

“Naturally, we regret any families who have left their homes, but once we have re-established Afghan government control they will return and will enjoy a better quality of life, free from the oppressive regime of the Taleban,” Brig-Gen Branco said at the press conference.

ISAF first reported that Garmsir had been cleared of insurgents in September 2006, when a combined force of Afghan National Army, ANA, and ISAF troops drove the Taleban out of the district centre in an operation lasting eight hours.

Operation Glacier, in February 2007, again drove the Taleban from Garmsir, and an ISAF press release from April that year claimed that reconstruction was already getting under way.

“In districts such as Lashkar Gah, Naw Zad and Garmsir, local Afghans have started seeing the benefit of a safer environment,” read the statement.

One year on, Garmsir is again at the centre of operations.

“This is the twentieth time I’ve heard there are military operations in Helmand,” said Faruq Dawer, deputy director of the Civil Rights Organisation for Afghanistan, an Afghan non-governmental organisation.

“When the Taleban go to a village, they don’t usually stay for a long time. Then the Americans come in and launch a military operation, counting civilian casualties as their military achievement. When they leave the area, the Taleban come back in. This doesn’t make any sense – you cannot stabilise the area this way.”

In fact, argued Dawer, military offensives of this kind only aggravate the situation.

“Civilian casualties are the reason security is getting worse,” he said. “The relatives of those killed join the ranks of the enemy to exact revenge.”

Another problem, according to Dawer, is the lack of cultural understanding, including on the part of ANA troops, many of whom come from northern Afghanistan and are unfamiliar with the overwhelmingly Pashtun south.

“For a non-Pashtun, even a police or ANA commander, all these turbaned people look like Taleban,” said Dawer. “But almost everyone wears a turban down there.”

“This is the fourth week of the operation,” he said. “But even if it goes on for four years, it will not have any result. The Americans and NATO should revise their policy.”

For their part, the allies state their presence in southern Helmand is open-ended.

“There is no set end-date for the operation in Garmsir. Marines will stay until the mission has been accomplished,” said Captain Kelly Frushour, public affairs officer of the 24th Expeditionary Force, in a statement given to IWPR. “And even though the Marines are not in Garmsir permanently, NATO and its forces remain committed to the mission there.”