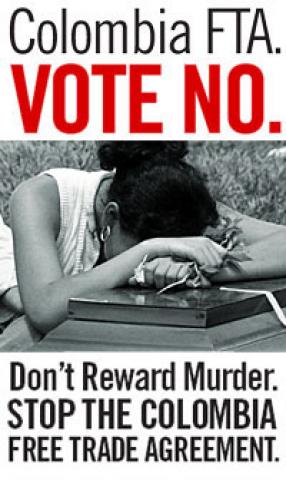 As the U.S.-Colombia Free Trade Agreement (FTA) is being introduced on Capitol Hill, working families are launching an advertising campaign to get Congress to reject the deal.An ad sponsored by the AFL-CIO will run in three Capitol Hill newspapers tomorrow. The ad urges lawmakers “Don’t Reward Murder. Stop the Colombia Free Trade Agreement.” (Click here to tell your representative to oppose a trade deal with Colombia until their government makes real progress in protecting the lives and rights of union members. Click here to download a PDF of our ad.)

The ad features a photo of a Colombian woman crying over the casket of a loved one. Colombia is the most dangerous place in the world to be a trade union member. Thirty-nine trade unionists were murdered in 2007, and another 17 have been killed in 2008—a rate of more than one a week. Of the more than 2,500 murders of trade unionists since 1986, the government has successfully prosecuted less than 3 percent of these cases.

Despite the strong objections of the leadership of both the U.S. House and the Senate, President Bush decided to send the agreement to Congress and to try and force a vote before he leaves office in January. Bush’s stubborn insistence on pushing a deal opposed by most workers in both countries “shows an outrageous disregard for basic human and workers’ rights,” AFL-CIO President John Sweeney says.

Once the agreement is submitted, Congress has 90 legislative days to act under the Fast Track trade authority rules that expired in July 2007 but still apply to deals pending at that time.  In part, the ad says the fight against the Colombia FTA is

about even more than the wrong-headed trade policies that have cost our country millions of manufacturing jobs, boosted trade deficits to record levels and shredded the paychecks of U.S. workers. It’s about cold-blooded murder.

Congress should refuse to approve this agreement until workers in Colombia can exercise their fundamental human rights without fear. Working families in Colombia as well as in the United States deserve no less.

To check out the ad and learn more about why the U.S.-Colombia FTA is bad for workers in both countries, click here to visit our Colombia FTA website.

Yesterday, when Bush announced he was sending the FTA to Capitol Hill, members of Congress expressed their outrage. Rep. Mike Michaud (D-Maine), co-founder of the House Trade Working Group, said:

The Colombia FTA is dead on arrival. Speaker (Nancy) Pelosi has publicly indicated Congress can’t take up an agreement with Colombia until the horrific violence and labor rights record are addressed. Despite the warnings, President Bush is forcing a vote and turning a blind eye toward the egregious human rights violations in Colombia. Yet again, the administration is pushing an agenda under the guise of national security in order to promote its own interests.