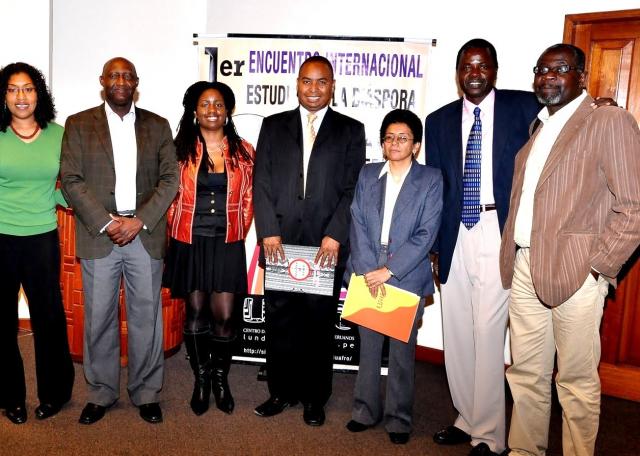 Despite threats, Afro Peruvian activists pledge to continue fighting for equality and respect for civil rights

Afro Peruvian leaders of the organization LUNDU, the Center for Afro Peruvian Studies and Advancement, have denounced what they consider is an alarming escalation of verbal attacks and threats of violence against members of their organization.

The attacks have increased since LUNDU protests forced the Lima-based television station Frecuencia Latina, to pull off a racist TV character called “Negro Mama”, which represents a Black man as a mentally retarded thief, a dingy individual with exaggerated facial features and nappy hair, reinforcing stereotypes against African descendants. This was part of a popular comedy show.

The character “Negro Mama” was taken off air by April 8th, 2010, after protests led by LUNDU against racist characters in Peruvian TV, including also “La Paisana Jacinta" which portrays Indigenous women as dirty, stupid, toothless and silly. "Jacinta" is still part of a popular comedy show.

LUNDU says that its offices are flooded with threatening messages recieved by telephone, mail, email, and especially through social media websites like Facebook, Twitter, and blogs. Even local popular newspapers are allowing hate messages in their comment boards.

This situation has worsened since April 21th, when Frecuencia Latina announced that "Negro Mama" will be back on air. That same day, LUNDU was celebrating the Day Against Racism by denouncing on 1,104 racist news reports posted in the Peruvian media, including 203 contents attacking Afro Peruvians with slurs such as "monkeys, gorrilas, baby maker stallions."

Monica Carrillo, the founder and leader of LUNDU, said via email that she is very concerned after several Facebook pages have been opened in the past weeks to promote racism in TV and violence against the LUNDU organization.

“Most of these websites have messages that are extremely violent and racist, there is even a Facebook page with my name on it, and my feeling is that I might be exposed to situations of physical violence.”

LUNDU has tracked at least five hateful Facebook pages, some of which include up to 9,000 members [Please consider reporting these pages as "racist/hate speech"]:

When Afro Colombian activist Pastor Murrillo-Martinez, a member of the United Nations Committee on the Elimination of Racial Discrimination (CERD) was visiting Lima last year, he didn’t expect to experience racism so drastically. A man in the streets spit on his face, called him racist slurs and then walked away like nothing had happened.

“This is normal in Lima” said Monica Carrillo, adding that some public business still reject people by their skin color, social status and the way they "look". A friend of mine who is African American was visiting Peru last year also, and he said that some children in the streets of Lima called him “monkey”, as a joke.

Willy Guevara is an anthropologist and associate scholar supporting the work of LUNDU, and he agrees that currently there is an increase of racist attacks in the Peruvian media, especially in the last few weeks. This coincides with the neo racist-movements being organized in the United States, after president Obama passed Health Care Reform legislation. “The difference is that in Peru, situations of racism can lead to physical aggression very easily,” wrote Guevara via email.

Facing potential physical attacks, members of LUNDU have expressed their concern because none of Peru’s authorities have spoken out against these threats, including the Ombudsman and Prosecutors offices, the Catholic church or other major religious groups, and even Peruvian watchdog human rights organizations are not mentioning this case yet.

When Frecuencia Latina decided to cancel "Negro Mama" its decision also included the continuation of "Paisana Jacinta", which depicts Andean women in offensive ways. The non-profit Center for Indigenous Cultures of Peru CHIRAPAQ, posted an article last week, demaning that such a racist character should cancelled for once.

"We are asking the media to include in their ethics rules a provision that ensures that their programs don’t engage in racist content that encourages violence and the marginalization of our peoples and cultures.[…] To the parents, you that sometimes refuse to accept your Andean or Amazon origins, we urge you to see clearly the prejudice hidden behind these [racist] jokes."

"In Peru, the image of our Indigenous women continues being violated by this humorous shows that constantly denigrate, devalue and despise the Andean, Amazon Indigenous peoples." added Chirapaq.

Wilfredo Ardito-Vega and Jose Carlos Aguero are human rights activists in Peru. In a recent interview posted (watch here in Spanish) by the non-profit Coordinadora Nacional de Derechos Humanos, they commented on racism in the media of Peru.

Ardito says that there is a little progress in Peruvian media with the recent inclussion of more Indigenous and Afro descendant peoples, but that is not enough. He commented on how self-discrimination causes Peruvians to accept racism as something normal in life.

Also Wilfredo Ardito noted that racist jokes can be the most painful form of discrimination, as it reduces the chances of the victims to defend themselves against something that is supposed to be funny.

Rocio Munoz is the coordinator of LUNDU, confirmed during a telephone interview from Lima that her office has received threatening calls, along with other messages of support. When the character “Negro Mama” was pulled off the air, she said some people got very upset.

“Many people called and said they were glad that finally someone is speaking out about racism against Afro Peruvians, but some other people called to insult us with all kind of offensive and racist slurs, some even have made violent threats.”

Those who defend racism in comedy shows in the TV stations of Lima, say that they have the right for this kind of entertainment, since it helps Peruvians coping with their stressful living conditions.

In the Internet, most of the racist comments are very similar: they attack LUNDU and its leader Monica Carrillo calling them “reactionary traumatized Black people” who happen to be antisocial. Also the comments say that most Black people in Peru don’t care about discrimination, and that comedian Jorge Benavides (the author and performer of Negro Mama) needs to continue his work.

All of this is written online with such a level of racism, that one wonders why the media of Lima is allowing this. Most of the verbal attacks are posted in websites of newspapers like El Comercio and Peru 21, both owned by the same corporate group, which is very influential in Lima’s society and the current governments of Peru.

“We deeply regret that [Peruvian] media is allowing hateful comments saying that these characters are not racist. They are allowing extremely racist comments, and my question to them is: What would happen if people from their communities were represented on TV with an exaggeration of physical features and filled with stereotypes? Their children would be affected. That is why they need to think about how we feel, because the violation of other people’s rights is not a joke” responded Rocio Munoz.

The role of Peruvian media is crucial in thie level of racism in Peru. Like everywhere else, media influences how we Peruvians perceive and see ourselves and others.

Although most of us Peruvians are of Indigenous and African heritage, but many support racist comedy shows in TV and other media, because they are not aware of the consequences of racism. They don’t want to painfully accept they are oppressed, or simply because they are used to it.

Racism is deeply rooted in the cultures of Peru, and especially in urban areas. After five centuries of oppression, slavery and social injustice, non-white Peruvians have accepted discrimination as part of our lives, and some people in Peru really think racism can be funny and harmless.

Discrimination will not exclude anyone who is not white. Even Peru’s former president Alejandro Toledo expressed his disaagreement with the mentioned racist characters, although many considered this a late reaction as part of his electoral campaign.

Toledo said to the media "[Jacinta] is an insult the the dignity of Andean women and I will rebell against that. […] I won’t tolerate that the media insults my Indigenous women, my Afro descendant, my cholo people." he added.

The following week, comedy shows in the Lima TV portrayed Toledo as a stupid, alcoholic Indigenous man, screaming next to his "neurotic" white European descendant wife.

Despite the obstacles, threats, attacks and apathy, Afro Peruvians activists are showing strength, courage and tenacity to continue their movement.

“We will not stop our protests, and if we have to face this aggression so be it, we have stayed in silence for too long and we will not allow any more mistreatments for our children who have to face racist harassments in the streets every day.” said Rocio Munoz at the end of our conversation.

Munoz also showed gratitud for the support that LUNDU has received from other countries. Several individuals and international organizations are supporting their efforts and are watching closely.

In human history, every radical change brings strong and desperate responses from those who benefit from the status quo. This might explain the violent reactions against LUNDU from those who support racism in Peruvian media. They might be afraid of change.

Afro Peruvians feel that this is the right time for Peru to stop racism, or at least penalize it. A new generation of activists are fighting for what they believe is right. They know they are not alone in their struggle.

If you want to take action against racist media in Peru, please read more information in this link I have prepared or join this Facebook page Against Racism in Spanish-Language TV and Media.