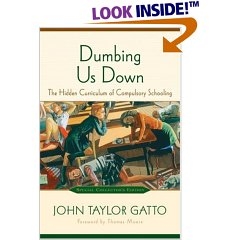 When people learned to unleashing the power from the coal and later oil, we entered a new era of human history, the age of machine or the age of mass production. For a moment, please put yourself back to that time and try to understand that era.

Mass production demands a single huge stable market. Otherwise the profit cannot be guaranteed for the investors. A diverse market is too risky for investors. To create such a single national market, people had to be dumbed down, so they would buy whatever was advertised on the TV.

For mass production, they need labors to work as dumb machine on the assembly line. But no one wants to be an assembly line worker for life. So they have to dumb people down.

Furthermore, Scientific Management was conjured to improve efficiency. SM basically is to say that workers shouldn’t think. Workers should focus on their mechanic repetitive work. If they think, it will slow the production down. Leave the thinking to a few managers. Only a few people can be the brains. Most people should be legs and hands. This worked. But people, essentially free and complete, are denied their basic rights.

SM is quite easy to understand if you think of yourself. If you want to do something with best efficiency, what do you do? First of all, you need to use your free will to think and feel what you should do. After you think about it, you just do it, finishing those steps without thinking until it is time to do the next round of thinking to prepare for the next round of execution. So SM is totally understandable. But to deny the majority of people their rights to be complete people and to think and feel for themselves, is a mock of our historical limitation.

How do they turn people into machine? Through compulsory schooling. School is not to teach you how to learn math. It is to make you hate math. It is not to teach you English, it is to make you hate English. Some people start understanding math earlier. Some start later. Some people start reading early. Some later. Some start music earlier. Some later. It is totally normal. But compulsory schooling demand children have to learn this much of math and this much of English in a certain grade, and humiliate children who are not ready yet with their test scores. Schooling makes children believe that they cannot do math, or they cannot do literature. So they had better stay in the literature domain to become an English worker, or stay in the mathematic domain to become an engineer. So schooling becomes a sorting machine. It sorts people very early in their lives into different categories of labors to be employed by mass production in the future. By lengthening the school hours and years, they take people away from real life. Without in touch with real life, people are made to believe they should just be engineer and engineering is the only thing the need to learn or they should be literacy worker and English is the only thing they should learn. If they are ever in touch with the real life, they would know that in real life it demands all types of knowledge. Making people only focusing on one subject of knowledge makes people powerless, only suitable to follow command to do some simple repetitive work. They cannot survive once the pre-defined environment change and there is no order to follow anymore.

Of course, school never really teaches you math or English. School only teaches you some facts, just enough for you to be employed in a predefined environment. You are given an illusion that you have mastered a subject (at least you got the degrees). School doesn’t want you to connect dots. It is pretty much true that whatever you major in college is going to be the major you are going to get screwed up with. That is why CS graduate don’t know how to use Unix or do programming. That is also why history major doesn’t know history, philosophy major doesn’t know philosophy, English major hasn’t read much literature, psychology major doesn’t really know the historical background of psychology, business major hasn’t done any business, and so on.

Mass production took all the producing activities from once self-reliant families and turned families into parts of social machine. It might make sense to mass produce clothing and food. But do you believe that the school is better than the family/community in producing men and women? To have real men and women, they need to experience love. Schooling cannot produce men and women. What they can do is only to mass produce labors.

To make the case more convincing, I want to provide links to the two congressional investigation into the role of business played in shaping American schooling. Mr. Gatto did an awesome job in providing this information: http://johntaylorgatto.com/chapters/12o.htm (notes: you can search congress on this page)

Now in our time, we are in the transition from the age of machine to the age of individuals. Enough sacrifice. It is time to make everyone complete.

The book Long Tail talks about the new phenomenon on the web that product or service is able to reach a small market and thus meet people’s diverse needs. So in the web2.0 era, you don’t have to mass produce or have a mass market to be profitable. This definitely changed the rule of the game.

Web lowers the cost of transaction in the market, making it a lot easier for individual professionals coming together to build their own small business. It also makes it easier for individual professionals in different fields to cooperate with each other. We see the evidences in citizen journalism, music industry and so on. So this new age is about empowering individual professionals so more people can be directly involved in creative work. In the old world, business and finance people are in charge. They reap most of the profits made by creative people. Creative people, in a sense, are exploited. In the new age, creative people will be in charge and make key decisions in their business. Google is a good example. Google is basically a technology company in the sense that technology people are making the key decisions instead of being dictated by business people. So is ohmynews, where professional journalists are making the key decisions. Independent musicians will be able to make profits by distributing their music online, or cooperate with independent photographers to make albums. So the new age is all about independent professionals cooperating together on and off the web. This of course has vital meaning for the humanity. We will be in a much better world where everyone has the freedom to pursue one type of art that s/he likes and is very good at. This is what makes people complete. This is what makes people experience beauty, real power and thus true love. Only by enabling people to pursue arts, to understand their selves, to be independent and self-reliant, can we resolve all those social issues we have today.

I am imagining that some years later it is norm that people only work 5 hours a day and 4 days a week in their companies. All the rest of their time is theirs.

The other side of the story is that people doing creative mental work would love to do manual labor once for a while. For example, I would love to work in the restaurant or be a house cleaner on the weekends. It is good relaxation and refresh of mind. So more people can share the load.

Furthermore, as I said before, finally we have something to make the incomplete science more complete. Ever since the founding of modern science, we excluded human being from the scientific research for the sake of not letting subjectivity interfere with objectivity. Misled by such kind of principle, the human science is going nowhere. Alexander Christopher, however, builds a new framework of science, which brings in human’s feelings into scientific research. Briefly, his basic argument is that when asked to compare two paintings, more than 90% of people will point out the same painting as the more beautiful one. So, Alexander argues, that our subjectivity is indeed objective, and that we cannot fully understand the world without bringing in the human subjectivity into our exploration of the world. Computer software is such a tool to explore human world. It is a tool to work with human’s mental world. It is to bridge human’s mental world with the extern physical world. Web is to connect people’s mental world together. Thus we finally have a new way to explore human science. Contemporary software is largely based on Alexander Christopher’s Pattern Language.

Most of the alienation of modern society (scientific management, eugenic, social Darwinism, behaviorism, compulsory schooling) can be traced back to the misuse of the incomplete science. It is time to incorporate human feelings. It is time to understand human mind.

We are indeed standing at the beginning of a great era. Many great ideas people have been fighting for thousands of years finally can be realized. A lot of hard work still needs to be done. And we need to do it quickly before some stupid politicians bring out the third world war and destroy the whole planet. Yes, we can always keep progressing, unless we kill ourselves.

Notes: read of John Taylor Gatto’s books for more details on compulsory schooling. Most of what I wrote about compulsory schooling here is a summary of my reading of his online book The Underground History of American Education. http://johntaylorgatto.com

Filed under: Opinion
Share Tweet Pin G Plus Email
previous article: Will Hyderabad turn into a city of AIDS?
next article: Web2.0 is grassroots