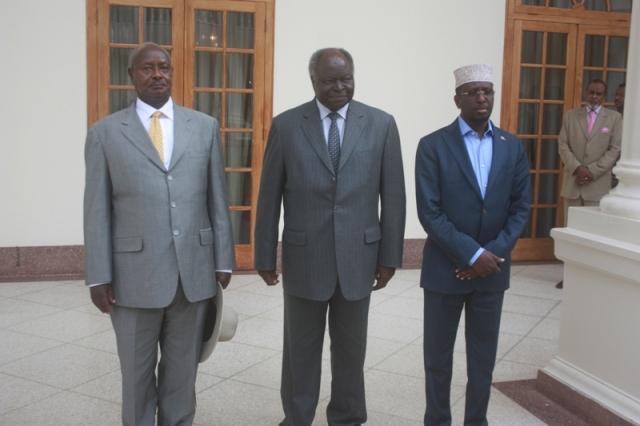 Somalia and Uganda have agreed on a coordinated approach with Kenya in fighting Al-shabaab militia to maintain peace in the Horn of Africa. The pact was reached at the meeting between Kenya’s president Mwai Kibaki, Somalia’s Sheikh Sharif Sheikh Ahmed and Uganda’s president Yoweri Museveni at State House in Nairobi on Wednesday afternoon.
“The meeting emphasized the need for enhancing coordination between AMISOM, TFG forces and Kenya Defense Forces in order to successfully defeat Al Shabaab,” said Foreign Affairs Minister Moses Wetangula when he briefed the media after the talk of the three leaders was concluded’.
The three presidents have agreed to wipe up Al-Qaida and secure peace and stability in Somalia and the neighbor regions.
“(They) Expressed confidence that the joint Kenya-Somali operation presents the region with a historic opportunity to restore stability and security in Somalia and called for regional solidarity to bring to an end the state of lawlessness that has prevailed in much of Somalia over the last two decades,” The communiqué read in part.
The three presidents appealed to the African nations who pledged to send troops in order to strengthen the capacity and capability of AMISOM who is already in Mogadishu, and Kenya who last moth had invaded the Southern part of Somalia pursuing Al-shabaab militant.
"The presidents paid tribute to AMISOM and the Troop Contributing Countries for their continued sacrifices inthe pursuit of peace and security in Somalia, which has resulted in the liberation of Mogadishu," the leaders added in the communiqué.
The leaders appealed to international community to assist humanitarian aid agencies relocate refugees to secure parts under the control of Somali government.
Somalia has been without stable government for last two decade following the 1991 ouster of General Mohamed Siad Barre.
Filed under: Politics, World
Share Tweet Pin G Plus Email
previous article: It’s American Censorship Day: Why Congress Wants to Blackout the Net
next article: The Writing Is On the Wall