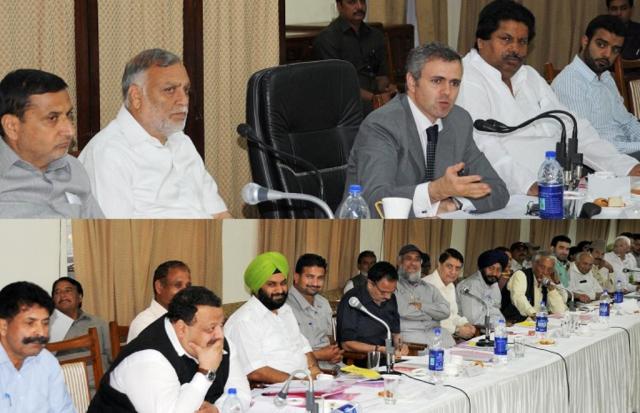 Chairing the 2nd meeting of Kissan Advisory Board here, the Chief Minister said that the very reason for establishment of Kissan Board in the State was to ensure placement of an effective and meaningful agriculture policy in the State involving the farmers in its formulation.

The Chief Minister said that the suggestions and expert opinion of the Members of the Board based on practical experience in the field in different climatic zones and areas need to be factored in the policy planning of the growth and development of agriculture and allied sectors in the State.

Omar Abdullah said that during the last three years his government has focused on this sector and different initiatives were taken to give considerable boost to farm production. He said the impact of these initiatives is visible on ground and State has shown gradual increase in the production of food grains, milk, mutton and poultry. “We have also to harness the potential of rearing eggs laying poultry birds to make the State self sufficient in egg production”, he added and said that initiation of MSME concept in the agriculture and allied sectors would at one hand provide employment to the people and on the other boost up the agriculture production in the State.

The Chief Minister directed the Agriculture Department for construction of Kissan Bhawan in on the same pattern as is being built in . The demand for the same was voiced by Members repeatedly during meetings and on other occasions.

Omar Abdullah asked for developing required infrastructure like controlled atmospheric storages at various places in the State to preserve the horticulture and agriculture produce besides milk products for better marketing. He also asked for working out plans for establishing milk collection centres and chilling units to help the cattle breeders to sell their produce smoothly. He also underlined the need for encouraging cultivation of vegetables, cash crops and flowers in green houses to ensure their production throughout the year.

Omar Abdullah said that the is an and its economy is greatly dependent on the growth and development of this and allied sectors. “We have two other sectors of tourism and power generation that can give fillip to our economic health and welfare of the State”, he said asking for greater focus on these sectors to provide strong edifice to the State’s prosperity and economic development.

The Chief Minister informed the Board about the historic breakthrough achieved by the scientists of SKUAST in Sheep Cloning extending his congrats to the and the Board in one voice also extended their congratulations to SKUAST.

Vice Chairman of the Board, Rachpal Singh presented brief about the functioning of the Kissan Board and highlighted its various achievements registered since its inception. He also talked about the futuristic plan of the Board aimed at comprehensive development of agriculture and allied sectors along with welfare of the farmers and others associated with these sectors.

In a PowerPoint presentation, Secretary of Kissan Board, G. N. Mir explained agenda points and reported the action taken on the decisions made in last meeting of the Board.

In a four hour long marathon meeting the Chief Minister heard the views of Board Members who spoke elaborately on different issues relating to the development and growth of agriculture and allied sectors in the State. Some of the Members shared their experience and success stories they have achieved in the field of agriculture, horticulture, animal and sheep husbandry and other related activities.