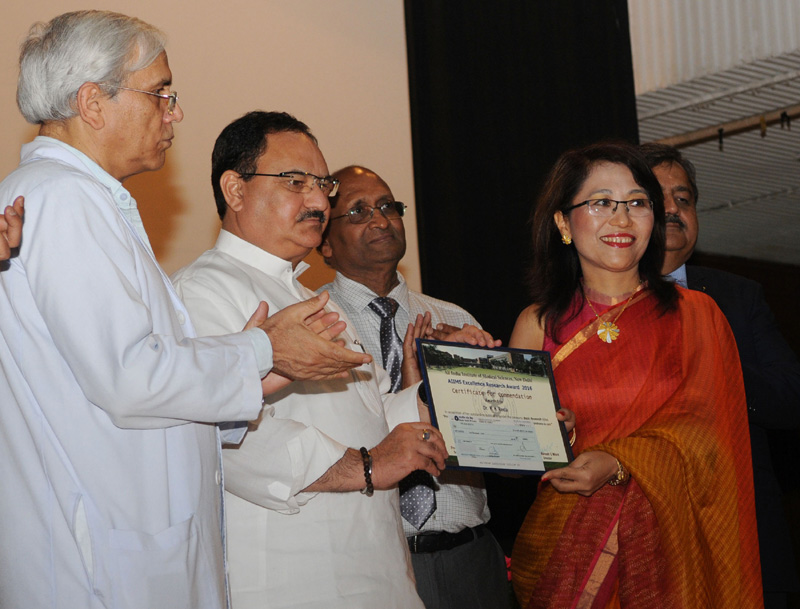 New Delhi (PIB-GR-TYP-BIN): “AIIMS has contributed significantly in quality healthcare. It has discharged its roles as clinical provider, Research Institute and Teaching Institute with considerable accolades over the past 6 decades.” This was stated by Mr. J P Nadda, Union Minister of Health and Family Welfare, at the Diamond Jubilee celebration function of AIIMS Delhi, on Sep 26. The Health Minister further added that during 2015-16, AIIMS Delhi, attended to 30 lakh outpatients, 2.5 lakh inpatients and performed about 1.5 lakh surgeries.

Speaking at the celebration function, Mr. Nadda said that the Institute has always maintained the highest standards of meritocracy and learning. “It has attracted the best talents across the country that enter this institute as young students and pass out with the intensity of commitment to serve the poorest of the poor,” Mr. Nadda said.

Mr. Nadda said that AIIMS is also the mentor institution for the new AIIMS like Institutions being established across the country. In this regard, the work done by AIIMS in formulating and reviewing subordinate legislation including the AIIMS Rules and Regulations has been commendable.

The Health Minister informed that the Union Cabinet has recently approved a proposal for setting up of National Cancer Institute (NCI) at Jhajjar under AIIMS at a cost of Rs. 2035 crores. NCI is the largest tertiary healthcare facility (both public and/or private) proposed in the country since independence. The proposed institute will have 710 beds for various facilities.

The Health Minister also inaugurated a free generic pharmacy store at the Institute for outpatients to cater to the needs of weaker sections of society and gave away research awards to the meritorious faculty members and students.