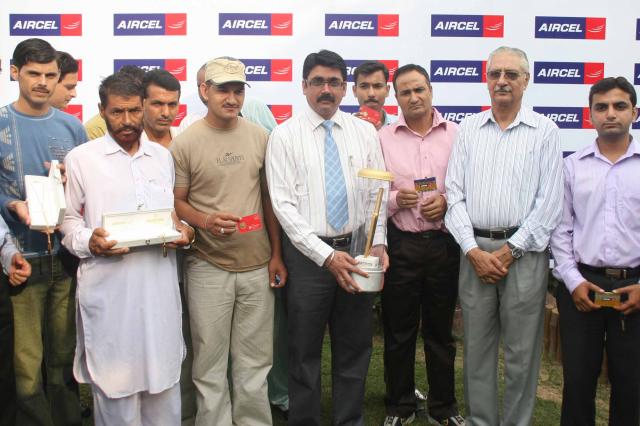 The lucky winner of this exciting contest for Aircel’s Jammu & Kashmir circle is Mohd. Shafi Wani. Md. Wani, the Aircel customer from stands to win a half kg Cricket Bat made of 22 carat (Hallmark) gold. Besides this, 8 lucky customers from have won other prizes like gold chains and gold coins.

As per Mr. Gurdeep Singh, Chief Operating Officer, Aircel, "At Aircel, we continuously provide schemes which excite and engage our customers and the Golden Bat Contest was one among them. The inspiration for the Golden Bat concept came from the Golden Boot concept that became extremely popular during the 2006 Football World Cup. On similar lines, we have introduced Golden Bat contest as gold and cricket is a winning combination in . We wanted to leverage IPL with a 360 degree marketing campaign. This contest was a big success for Aircel."

It may mention here that Aircel, a part of Maxis Communications , , is ‘s fifth largest GSM mobile service provider with a subscriber base of over 13.12 million and is one of the fastest growing mobile operators in the country. In its current markets, Aircel is the number two operator with an 18.2 percent cumulative market share. It is also the market leader in Tamil , North-East and Chennai. Aircel is now present in 10 Telecom Circles (Kolkata, Assam, Bihar, Chennai, Himachal Pradesh, Jammu & Kashmir, North East, Orissa, Tamil Nadu and West Bengal) and with spectrum secured for the remaining 13 (total of 23 circles in India), the company is on track to become a leading Pan-India Operator.

Filed under: Business, World
Share Tweet Pin G Plus Email
previous article: Schumi… the greatest of them all???
next article: a holiday in the KodavaNadu (Part 1)