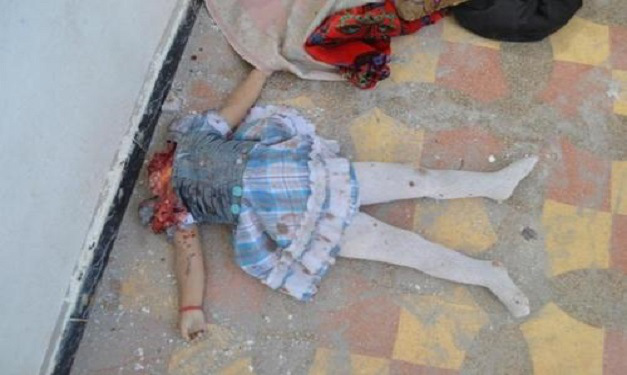 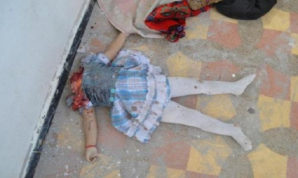 No apology for her – the headless corpse of a young Syrian girl lays in a courtyard of a school in 2013. She was killed by U.S. backed FSA rebel groups who cut her head off for being Christian.

Oops – it seems that al-Qaeda terrorists in Syria have issued an apology for mistakenly cutting the head off a man who it wrongly suspected was a Shia militia member affiliated with the Syrian Army. Well it turns out he was a fellow terrorist instead.

In explaining the error the al-Qaeda spokesperson Mr al-Qahtani made reference to a story in which Mohammed said Allah would forgive a man who killed a believer in error, according to the Telegraph which first reported this sickening story.

In addition the Islamic State of Iraq and al-Sham militants say they are “very sorry for the misunderstanding.”

Head hunting and beheadings for sport are popular among radical extremists terrorist groups like al-Qaeda and al-Sham.

Beheading is a hallmark of sorts for U.S. backed Syrian rebel groups.

Oddly the U.S. makes no real distinction between the rebel groups and is busy providing them weapons and support- which a majority of people oppose by the way. In fact six of ten people interviewed view the rebels as no better than the Syrian government, according to the Pew Institute (source: Public remains opposed to arming Syrian rebels  http://www.people-press.org/2013/06/17/public-remains-opposed-to-arming-syrian-rebels/). This hasn’t stopped the U.S. government from doing it anyway?

But who cares right – well you should – after all your paying for it to the tune of over $1 billion dollars so far (source: Who funds Syrian rebels – you do http://rt.com/usa/obama-terrorist-arms-supply-966/

Question:  Since when is arming one side or another in a vicious sectarian civil war ever a good idea?