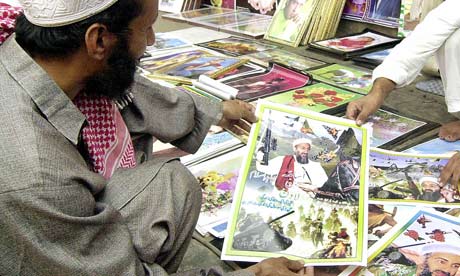 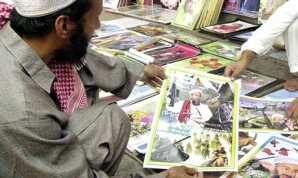 Pakistani men purchase al-Qaeda posters to hang in their bedroom. These poster  are very popular in the marketplace in Pakistan and show popular support for the terrorists group operating inside their country and Afghanistan – where they are busy plotting against US troops.

Contained within the pages of the Committee Report 22 of 108 – House Report 113-102 – National Defense Authorization Act for Fiscal year 2014 are references to the situation in Pakistan, particular to that country’s continuing effort to undermine and foil the US fight against terrorism in Afghanistan.

“Al Qaeda continues to enjoy sanctuary in, and operate from, the territory of Pakistan”, the report notes.

“Moreover, the Government of Pakistan has not allowed U.S. trainers to work with Pakistan’s Frontier Corps, which has led the committee, in consultation with the Department of Defense, to not renew the Pakistan Counterinsurgency Fund in this Act.

The committee does acknowledge that the Government of Pakistan has reversed its antagonistic course in some areas, including re-opening the Ground Lines of Communication, and has constructively worked with the International Security and Assistance Force on critical cross-border issues. However, more must be done in order for the committee to be confident that the Government of Pakistan is willing to engage in a comprehensive strategic partnership with the United States.

Additionally, the committee cautions that it will remain skeptical of furthering pre-existing programs, and creating new programs, to engage with the military of the Government of Pakistan until there are meaningful steps by the Government of Pakistan to fully support U.S. goals and interests in the region” (source: House Report 113-102 – NATIONAL DEFENSE AUTHORIZATION ACT FOR FISCAL YEAR 2014 – Congressional Record http://thomas.loc.gov/).