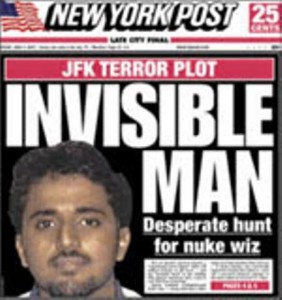 In June 2007,  Shukrijumah was “Al Qaeda’s operations leader on a nuclear terror plot targeting the United States.” According to the Post –  Osama bin Laden had chosen him specifically “to detonate nuclear bombs simultaneously in several U.S. cities.” That would make him hands down the greatest living threat to the U.S.  He is sometimes called “Mr. Nuclear.” His other nickname is “the Invisible Man” – because law enforcement hasn’t a clue where he is at right now?

He is perhaps the most dangerous Al-Qaeda terrorist in the world!

His name is Adnan G. El Shukrijumah and he was indicted in the “Eastern District of New York in July of 2010 for his alleged role in the mother of all  terrorist plot to attack targets in the United States and the United Kingdom.

The charges reveal that the plot against New York City’s subway system, “uncovered in September of 2009, was directed by senior Al-Qaeda leadership in Pakistan, and was also directly related to a scheme by Al-Qaeda plotters in Pakistan to use Western operatives to attack a target in the United States.”

El Shukrijumah is thought to have served as one of the leaders of Al-Qaeda’s external operations program, as well.

The Rewards For Justice Program, United States Department of State, is currently offering a reward of up to $5 million dollars cash information leading directly to the capture of Adnan G. El Shukrijumah.

Warning: Suspect should be considered armed and extremely dangerous.

If you have any information concerning this person, please contact your local FBI office or the nearest American Embassy or Consulate.

El Shukrijumah occasionally wears a beard. He has a pronounced nose and is asthmatic. El Shukrijumah speaks English and carries a Guyanese passport, but may attempt to enter the United States with a Saudi, Canadian, or Trinidadian passport.