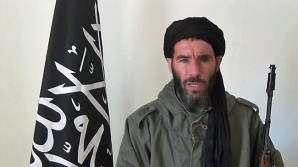 The terror mastermind behind the massacre of Westerners  at a gas plant in Algeria, including three American’s last year “Mokhtar Belmokhtar” is now said to be actively recruiting foreign jihadi fighters coming from Syria to launch attacks across Europe and the United States. Including those said to be holding US and British passports.

An Al-Qaeda leader, dubbed ” Mr.Uncatchable” (Mokhtar Belmokhtar) has once again surfaced and is believed hiding in Libya, a terrorist safe haven, created by the United States after the 2011 invasion and overthrow of the government of Muammar Ghadafi.

Mokhtar Belmokhtar is the leader and founder of the Khaled Abu al-Abbas Brigade (also known as the Signed-in-Blood Battalion) perhaps the most ruthless, blood thirsty group of terrorists alive currently on the planet!

Mokhtar Belmokhtar has apparently survived a shoot-out with the Chadian security forces in Northern Mali last year, where he was initally reported killed.  Those reports turned out to be erroneous.

On at least two previous occasions he has been reported to have been killed only to pop up later in another part of the region like a terrorist “phoenix”  rising from the ashes.

“Its like he has nine lives or something” said one French intelligence official, speaking via Facebook who requested not to be named in this report.

Mokhtar Belmokhtar, gained world-wide notoriety when he masterminded the attack on the an Amenas gas plant in Algeria in which 40 hostages were killed during a four-day stand-off which began on January 16 last year.

Of that number —were three American citizens 1) Frederick Buttacio, 2) Victor Lynn Lovelady, and 3) Gordon Lee Rowan—who were viciously murdered in the four-day siege of the complex. Evidence indicates they may have been tortured in the process.

I should add that Belmokhtar is suspected of playing a part in the attack on the US consulate building in Libya on September 11, 2012 that killed Ambassador Stevens and two CIA contractors, Tyrone S. Woods and Glen Doherty.

Ten others were also injured in the attacks

Although there is only circumstantial evidence pointing to  Belmokhtar involvement in the 2012 Benghazi attack it should be pursued! Yet for whatever reason the FBI has chosen not to pursue it?

Belmokhtar is actively being hunted by at least a dozen or more MI6 agents, and numerous spies from France’s DGSE (General Directorate for External Security (French: “Direction Générale de la Sécurité Extérieure”) which has issued a “termination order” on him.

He is perhaps “the most hunted terrorist in the world right now”, said one MI6 source. “They want this guy killed or captured in a bad way right now”, he added.

Belmonkhtar currently has a $5 million dollar bounty on his head (see Rewards for Justice program http://www.rewardsforjustice.net/english/mokhtar_belmokhtar.html).

An amount I have asked to be increased to $10 million through petitioning Lisa Monoco , who currently serves as the Assistant to the President for Homeland Security and Counterterrorism. This in an effort to keep the pressure on him.

A request that has been repeatedly ignored for some reason. God how I miss Richard Clarke!

Its sort of ridiculous, when you think about it that one guy can be the cause so much trouble in the world and yet evade repeated assassination attempts and capture attempts.

Anyone with information is urged to contact the FBI tip line https://tips.fbi.gov/ or nearest US embassy location overseas.

Belmokhtar has previously conducted numerous kidnapping operations against Westerners, acquired weapons for use in terrorist attacks, and was involved in various negotiations for hostages taken by AQIM (Al-Qaeda in the Islamic Maghreb).  Belmokhtar, a former Algerian soldier, was trained in camps in Afghanistan.

Filed under: News, Terrorism
Share Tweet Pin G Plus Email
previous article: Seventy Two Infants Born To HIV/AIDS Infected Mothers Have Been Infected With The Disease
next article: Yo Hillary! What’s your message?