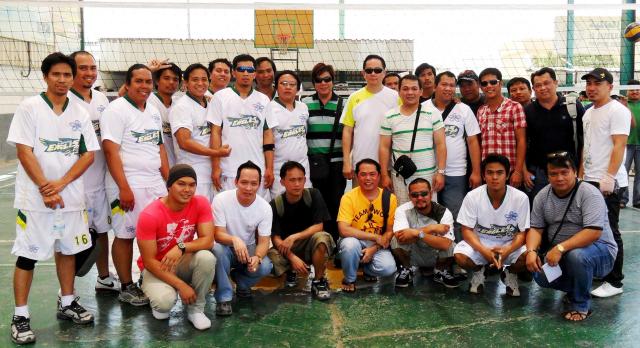 Al Khobar, Saudi Arabia – The scorching heat on midday Friday that everyone felt do not slow down the Suwaidi Eagles on their determination to win against the mighty Gulf Consult in Volleyball Men’s Division Group A of the ongoing Sports Festival organized by All Filipino Community Sports Commission (AFCSCOM) in cooperation with the Philippine Embassy’s Philippine Overseas Labor Office Eastern Region Operations (POLO-ERO).
The Sports Festival that includes volleyball is part of the 113th Philippine Independence Day celebration which will be held on June 10.
In the Philippines, Independence Day is being celebrated every June 12.
Suwaidi Eagles finally ended its drought as the Eagles survived the Gulf Consult 25-21 25-17 to capture their first win before the boisterous crowd at Al-Jazeera International School Volleyball Court.
“This is what we’re waiting for to give our company an honor.” said a teary-eyed Andy Cauyan whose team took via 1-2.
“It’s an honor for us . . . after so many games we were able to win this game and we could impart this with our co-employees of Suwaidi.” Gilbert Jamero said.
The Eagles drew stellar performances from Wally Galang and its guest player Mr. Borris who had 14 & 9 points each.  Wally and Boris took turns at the offensive end while providing Gulf Consult with a sturdy defensive wall.  Raring to make Eagles raced to a spurt to lead.
Gulf Consult managed to pull to within three times but that was as close as they could get with Wally was just too much to handle.
Borres fired timely hits in the crucial stretches of the deciding set while Wally Galang, Ronnie Casasiempre sealed the deal with a clinching tip as the Gulf Consult crumbled to the floor.
Power spiker Wally & Borres did all they could to wind up with 14 points, 4 of them from kills.
Gulf Consult in the other hand looked sharp in the opening set but had futile offensive options when its best player was in the backline as its skipper struggled with eight measly points.
Most improved player Julius Madrigal also gave Eagles another scoring option as they finished with 18 points.  Eagles Albert Empedrad bagged the finals.
“How much more if the Eagles Team were complete?” narrates the team manager Abner Garcia as four of his players were not around due to work assignments.
The Eagles has displayed their skills as what Jimmy King, the 2005 Bagong Bayani Awardee and Al-Suwaidi Procurement Manager, describe the team players.
“Maybe because SAHI Volleyball Team Women’s Division has cheered them.” team coordinator Remigio Quiambao said.
It was indeed an outcome of consolidated efforts from Team officials and staff composed of Head Coach Garry Gellangala, Coordinator for Ras Tanura Remi Quiambao, Jubail Coordinator Geanne Pasco, Abu Hadriyah Coordinator Gilber Jamero, Nurse Andy Cauyan, Statistician JC Villanueva, Support Staff for Ras Tanura Emi Ramirez, Support Staff for Jubail Jezzrell Dandoy, Support Staff for Abu Hadriyah Jeofre Dela Cruz and Eagles Team manager Abner Garcia plus of course the moral support extended by avid fans of Eagles Alfredo Villafuerte, Paterno Fungo and Ferdinand Fernandez Bulan Jr.
Suwaidi Eagles is composed of Johnro Ampong, Jeffrey Labonhog, Dexter Lloyd Rodoc, Albert Empedrad, Daniel Vacalares, Rigoberto Bartolabac, Julius Madrigal, Wally Galang, Richard Velonta, Cosme Pelen, Darwin Nidoy, Wilson Caboguang (MVP on the last concluded Inter-Sabic Basketball Tournament), Frederick Bernales, Ronnie Casasiempre, Antonio Cuayson, Resril Borres, and Jared Curaraton.
Filed under: Sports
Share Tweet Pin G Plus Email
previous article: Nepal:World’s most inclusive Constituent Assembly in danger of dissolution;extension hoped
next article: MLB 2011: SCORES 05-27: SCHEDULE-STARTING PITCHERS-TV-05-28