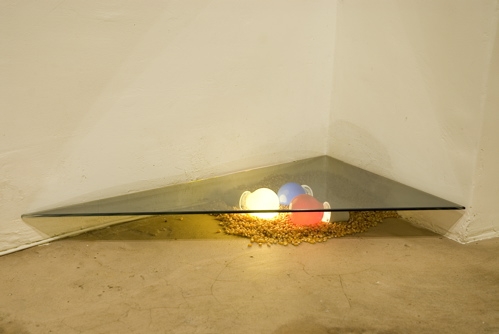 For the occasion of his first solo gallery exhibition, Alessandro Piangiamore created his own wall text that announced the title of the show: Sfidando la veritÃ  con la gravitÃ  (Challenging truth through gravity).  But rather than a conventional typeface neatly adhering to the wall, the text was sculpted as a set of three-dimensional cement letter blocks balanced seemingly precariously on a thin pipe that ran over the central archway under which the spectator would pass.  By the time I viewed the exhibition (towards its end) with Piangiamore, two of the concrete letters had fallen from the metal tightrope above and lay as injured sediment on the floor below.

According to the artist, one of the letters had originally been installed on the ground while the second met its fate during the course of the show.  With both of us standing below the text, and with me fearing a possible bump on the head, I asked Piangiamore whether the text had ever been physically attached to its support.  Summoning his recollection, and after a deliberately emphatic pause, he met my gaze with a worried stare: "Ma non so, cara," ("But I don’t know, dear").  And I laughed.

Piangiamore’s own sense of play resonates in his art where his research occupies the space of tension somewhere between humor and fear, movement and stasis, nature and artifice.  By revealing the multiplicities of meaning within his aesthetic constructions, Piangiamore engages the spectator in a contemplation of his or her own identity as subject.

Within his two-dimensional compositions, photography, text, and the printed image visually reference sources of pleasure and cultural advancement only to negate the certainty of such possible outcomes.  In a set of two photographs entitled Horizon, the viewer is invited into a scene of tranquil relaxation on a beach only to be confronted with a distorted horizon line that would make such participation impossible.  In the montage, The Dark Side of the Moon, a banner with the logo for Google takes the place of the flag announcing man’s arrival onto the moon; with the knowledge that this footprint could be a fraud, the viewer is invited to regard sources of information and the authorities behind them with a similar attitude of question.  In another work, Self Portrait, that reads, "THE VALUE OF THIS WORK OF ART IS GIVEN BY ITS BEING, ITS SELF-IMAGE IS ITS OWN MEANING.," Piangiamore solicits the viewer as the visual icon of the captioned image by means of a reflective black surface similar to that of a photographic negative.  As surface becomes a stage documenting the viewer’s participation, however, the source of such "value" and "meaning" oscillates between the pre-existing value given by the work itself and that imposed by a subject/consumer/purchaser whose "self-image" unites with the work by means of the reflection.[1]

The photograph is again referenced in Piangiamore’s overt homage to Duchamp’s With My Tongue in My Cheek 1959 in the three-dimensional assemblage Ma-I Tong Inmaycik where the trick behind the feigned suspension of a cheek (signified by a magnet) on a slanted window is revealed by its double on the reverse side of the glass.

However, where Piangiamore’s skill as an artist, inventor, and thinker might synthesize best is in his construction of a popcorn machine whose Pop art hardware and dependence on the intersection of three walls contribute to the double-meaning of the work’s title, "Popcorner."  Referencing Pop through the assemblage of readymades–a trio of red, blue, and yellow bulbs–while at the same time echoing the research of Arte Povera, the heat emanated by intensity of the lights (here an electric source of energy) under a glass surface causes the effect of a microwave.  Exposed to the heat, a heap of uncooked corn kernels (a staple food product) threatens to burst into its pop-cultural alter ego: the buttery sweet, movie-going snack of popcorn whose smell is already detected in the air surrounding the machine.  The delicate stasis of the kernels is disrupted when the temperature becomes too hot; the machine erupts as the glass pops, causing the popper to dislodge from its corner.  It is at the moment of this rupture that the surface once bearing a subtle reflection of the onlooker’s downward gaze both cracks and fragments.  And the self-image returned to its beholder is reflected, refracted.

[1] See Rosalind Krauss’s discussions of photograph as icon and index and the relationship between caption image in Krauss, Rosalind, "Notes on the Index: Part 1," in The Originality of the Avant-Garde and Other Modernist Myths, London: MIT Press, 1996, p. 203-205.