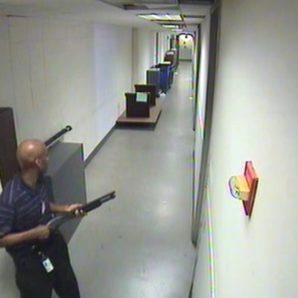 Alexis on a shooting rampage hunts victims at the Washington Navy Yard before he was confronted by police and shot to death.

The report reads as follows:

“At the time of the shooting, Aaron Alexis was a vetted member of the U.S. Navy Individual Ready Reserve and a defense contractor employee cleared to the Secret level. He was authorized access to the Washington Navy Yard and to Building 197 through the use of his DoD Common Access Card (CAC) and valid building pass.

The Internal Review Team found the Washington Navy Yard was in general compliance with DoD installation access policies, although random vehicle or bag inspections were not conducted in accordance with DoD policy.

There is no way to know, however, whether more frequent inspections might have given law enforcement personnel the opportunity to discover the weapon Alexis carried onto the installation and neutralize or minimize the immediate threat.

At various points during Alexis’ military service and subsequent employment as a cleared contractor — from the background investigation in 2007 to the disturbing behaviors he exhibited in the weeks leading up to the shooting — the review revealed missed opportunities for intervention that, had they been pursued, may have prevented the tragic result at the Washington Navy Yard. When examining events in Aaron Alexis’ history individually, they yield little in the way of warning. Combined, however, they demonstrate a pattern of misconduct and disturbing behavior that would have prompted investigators, for a position of trust in the Federal workforce, if they had been aware of his history in aggregate.

The Internal Review Team identified several vulnerabilities that may have alerted the Department to the potential threat before the incident occurred. The team’s significant findings, summarized below, are detailed in section 7 of this report:

• The Navy granted Alexis a Secret security clearance with specified conditions, but there was no oversight mechanism in place to ensure compliance.

• Alexis’ Navy command did not report in the security system of record multiple incidents of adverse information during Alexis’ active duty service.

• Alexis’ employer, The Experts, Inc., had no insight into Alexis’ chronic personal conduct issues during his Navy service when they hired him and placed him in a position that required access to classified information.

• Alexis’ employer did not report behaviors indicating psychological instability and did not seek assistance from a mental health professional or guidance from the Defense Security Service.

• Although the Review found no direct ties to gaps in physical security practice and the actual events of September 16, planned cuts in physical security and vulnerability assessments funding and an overall lack of compliance with installation access control policy2 are likely to leave the Department vulnerable to threats to mission assurance.”