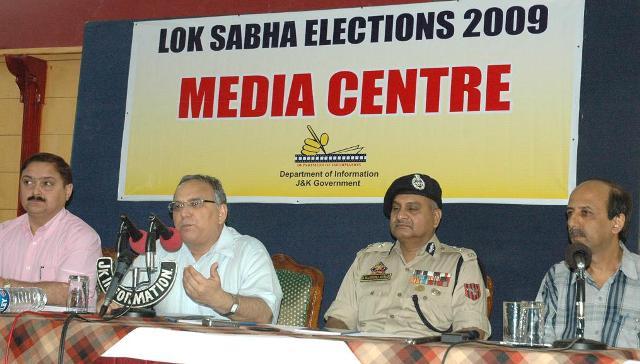 Chief Electoral Officer (CEO), J&K, B. R. Sharma today said that all arrangements have been completed for smooth conduct of polling in Jammu Parliamentary constituency where elections are being held on Thursday in the first phase of five-phased elections in Jammu and Kashmir.

Giving details, Mr. Sharma said that campaigning for the first phase ended at 5 p.m today and over 17 lakh voters will decide the fate of 21 contestants over 20 Assembly segments of Lok Sabha seat in the inaugural phase on April 16.

The Chief Electoral Officer said the Election Commissioner of India, Mr. Navin B. Chawla had expressed satisfaction over the arrangements made for free, fair and transparent elections in the State while visiting Jammu on April 10. He said deployment plan and administrative arrangements have been thoroughly reviewed ahead of the first electoral exercise beginning April 16. “Around 27 poll parties in Rajouri district were despatched to remote areas today and all poll parties will be at the polling stations by 5 p.m. tomorrow”, Mr. Sharma added.

Mr. Sharma said that out of the 65 lakh total electorate in the State, around 45 lakh have EPICs which the voters will have to produce at the time of voting. “The remaining voters can use any of the alternative documents permitted by the Election Commission to cast their vote”, he explained.

Replying to a question, the Chief Electoral Officer said that nobody will be allowed to intimidate the voters. “Voting is the discretion of the elector and no one can coerce the voter not to vote”, the CEO said. He said the Election Commission for the first time had started Vulnerability Mapping of all the constituencies to identify communities who have not voted for a long time during the previous electoral exercises and probe the reasons for the same.

Replying to another question, Mr. Sharma said that tampering with the EVMs is technically impossible, adding that before voting commences, the Presiding Officer undertakes a “Mock Poll” and ensures that machine is perfectly in order. Any mishandling of the machine is taken very seriously by the Election Commission, he said, adding that all the machines have been Braille-enabled to facilitate visually-impaired voters. “All new EVMs are Braille-enabled while as the old ones have been retrofitted with Braille engravings”, the CEO said.

Mr. Sharma said that there have been very few complaints of violation of Model Code of Conduct and notices have been issued in some cases.

Replying to a question about the payment of stipend to the poll staff in the last Assembly elections, Mr. Sharma said that Rs. 35 crore have already been released for disbursement among Presiding and Polling Officers in the last financial year.

Speaking on the occasion,  Rajendra said all security arrangements are in place for the first phase of elections in the State and the polls will be conducted peacefully. “We have not disturbed the security grid and no reinforcements have been brought from outside the State”, he said, adding that all vulnerable polling stations have been identified and sanitized.