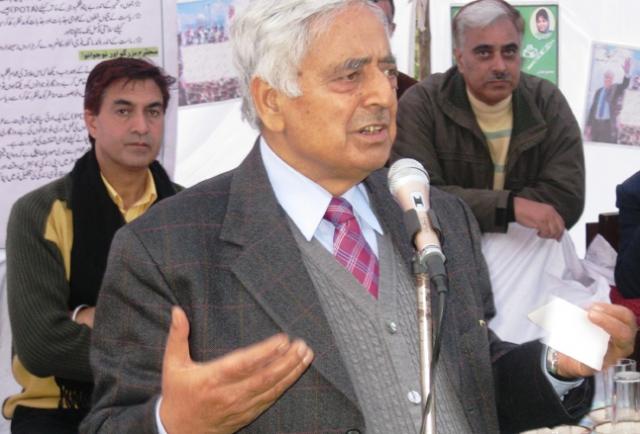 Srinagar, January 13 (Scoop News) –Expressing concern over slow pace of restoration of facilities after the recent recent snow fall in Kashmir especially the south Kashmir PDP patron Mufti Mohammed Sayeed  today urged the govt to reach out to the people in real sense and solove their problems. In a statement issued here today Mufti said it was indeed a matter of shame that patients couldnot reach to the  hospitals in time just because roads has not been cleared of snow even a  week after the snow fall. He expressed grief over the death of the patients who could not access medical facility because of blocked roads in Tral. He said there are reports that many other areas are still awaiting road clearance.

Mufti said even in the Anantnag constituency which he represents in the Assembly people are faced with huge dislocation in life. Many interior roads are still to be cleared and power is yet to be restored in many localities. He said Kihirbal, Monghall and other areas continued to face problems on account of road connectivity and electricity. Transformers at many places need repairs and replacement.

Mufti said it was unfortunate that the govt had issued an “All is well” certificate on the crucial supply position of essential commodities. He said people are facing immense problems to find gass, kerosene oil and other ration items while the prices of commodities in the open market have sky rocketed in the past few days. The administration is apparently finding it beyond it self to intervene on the side of consumers. He said in certain areas people have been in que for days to get cooking gas or kereosene but have to return empty handed.

The PDP Patron said scarcity of drinking water has reached alarming proportions and people are finding it extremely difficult to fetch water from long distances in sub zero temperatures. He said the govt needs to do more on the ground than it is trying to convince the people having done through official press releases.