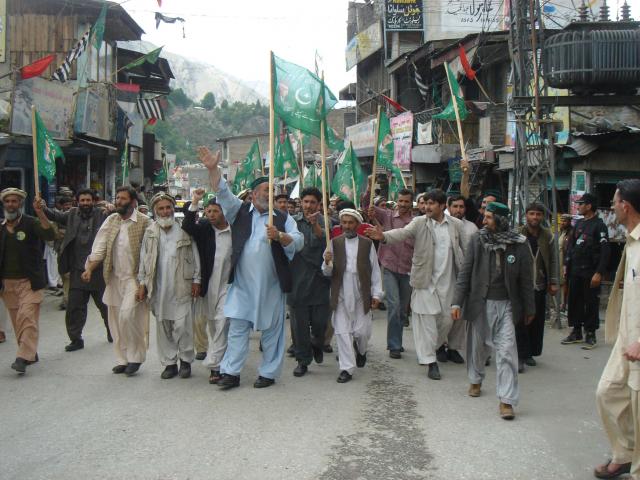 CHITRAL: All Pakistan Muslim League (APML) Chitral will not boycott election 2013 at Chitral. Addressing a public meeting at APML  office  Chitral presiding over by Jandoola Khan elites from different parts of Chitral said that we are hopeful that our candidate will success in this election . Addressing on the occasion elites from different parts of Chitral termed Parvez Musharaf benefactor of Chitral by launching several developmental network including construction of Lawari tunnel. They said that they were informed by Miss Asia Ishaq general secretary of APML that candidates from Chitral were allowed to contest general election 2013. They said that announcement of election boycott by Dr. Amjad is a conspiracy against party and they are not agree with this decision because majority of Chitral people like Parvez Musharaf and they want to cast their vote in favor of APML candidates. Talking to this scribe Shahzada Khalid Parvez district president of APML and candidate from PK 89 said that we will never boycott of election until Parvez Musharaf not inform us personally within 24 hours. Shahzada Iftikharuddin candidate from NA 32 said that people of Chitral love Musharaf and they like their party candidate let us approach public and they will decide that either they like him or not. Former MPA Haji Ghulam Muhammad candidate of PK 90 upper Chitral is optimist that we will success in upcoming election because of dedicated services of Parez Musharaf and majority of Chitral people like parvez Musharaf. Those who spoke on the occasion were Fazal Rahman chairman, Shereen Khan, Jandola Khan and other. At last they held a rally in favor of Parvez Musharraf chanting slogan of long live parvez Musharaf which was ended at PIA square. A large number of people attended public meeting and proMusharaf rally.

Filed under: Opinion, World
Share Tweet Pin G Plus Email
previous article: Find the Cause AND Treat The Symptoms of ASTHMA
next article: Public Sector Pensions and The Fall of the Western World