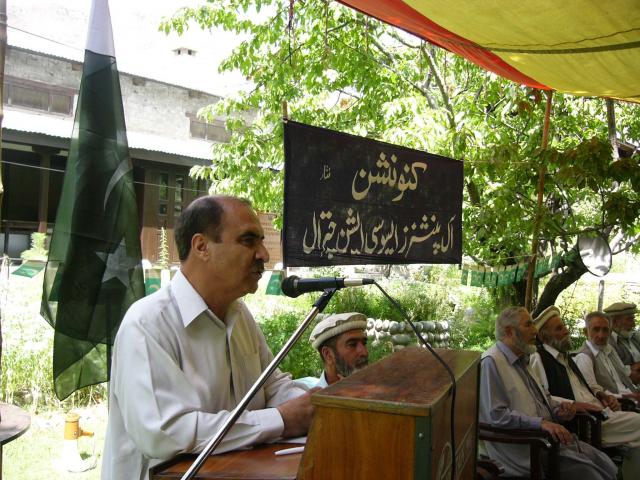 CHITRAL: Like other parts of the country 62 Independence Day was commemorated/celebrated at Chitral. In this connection a simple but prompt function was held at Government Centennial Model High School Chitral. District Coordination Officer (DCO) Chitral Mutasim Billah Shah was chief guest on the occasion. He hoisted national flag at school and listened national anthem presented by students of the school. Later on he stressed upon the students while addressing to the ceremony that they are architects of the nation and they should to read deeply and serve the country and nation.

Two local paraglide also demonstrated of paragliding voluntarily on the occasion of independence day of the nation.

A one-day convention of all Chitral pensioners Association held here at a local hotel under the chair of Wing Commander Retired Fardad Ali Shah while Sub Retired Mehboob Alam presided over the ceremony. The participants complained of non-disbursing of 25% allowance to retired personals of Chitral Scouts. They also demanded for distribution and disbursement of monthly pension at their hometown bank branches or post office. They also demanded for merging of an other association with this parent one for jointly efforts to protect for the rights of retired officials. Father of a martyred of Kargal complained of non-issuance of plot announced by then Chief of Army Staff at Chitral ground. Dr. Sardarul Mulk Director General Health retired stressed upon the participants for unity and concentrated struggle for their rights. Subadar Mehboob Alam and other thanked Fardad Ali shah for providing them a office for association and assured the association of their full cooperation.

The participants expressed their fully trust on the present chief patron Fardad Ali Shah and his cabinet.

TMA Chitral will be streamline on latest developmental path. Computerized bills at first time in the history of TMA Chitral.

To Improve condition of Water & Sanitation Unit of Tehsil Municipal Administration for supplying of clean and potable drinking water Tehsil Nazim Sartaj Ahamd Khan hired services of experts. The team comprising on experts of World Bank, Water and Sanitation Program, CLTS and other. The experts conducted a survey in detail to visit all network of WSU and submitted their reports along with possible solution and proposals. World Bank representative Musaddiq presented his report in detail. He said that main water source having some technical fault, which should to remove immediately for conservation of water. Water meter installed in 1995 are mostly out of order and not working properly as its material and other equipment too not suitable for climate of Chitral.

He said that meters installed to check water consumption could easily be stopped with magnetic power by touching with meter. He said that there is lack of gate wale and water is not distributing equally. He said according to a survey some 50% consumers have not meters or having illegal connection or their meters are out of order. Besides it some 400 consumers are defaulter at only one specimen area whose get water connection illegal after disconnecting it due to non-payment of utility bill. Farid Ahmad and Shah Nasir also briefed the session.

It was also revealed that WSU have liability of more than one million rupees as 1372876 rupees are still its arrears on behalf of consumers. As 2282 consumers are defaulters having total 32000 connection. The experts also framed computerized billing system of WSU and proper manage of its record. The experts also determined to declare Chitral a open defecation free district by improving its sanitation system and creating awareness among the general public.