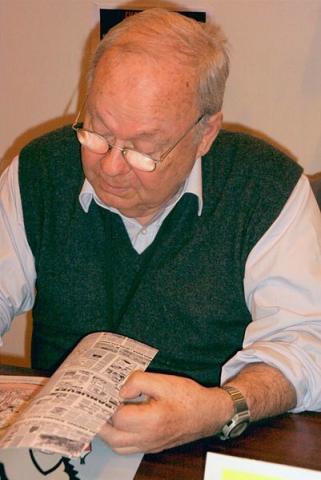 A French cartoon involving President Sarkozy’s son, Jean, and his Jewish fiancée, judged by many to be anti-Semitic, has inspired national debate over free speech.

In early July, the French left-libertarian magazine Charlie Hebdo published a cartoon from 79-year-old cartoonist Bob Siné. Siné, who has previously admitted to being an anti-Semite, created a cartoon claiming that President Nicholas Sarkozy’s son Jean will convert to Judaism before marrying his Jewish fiancée, the wealthy heiress Jessica Sebaoun-Darty. Siné wrote: “He’ll go far in life, this little fellow!” Jean Sarkozy denied that he would convert.

The cartoon didn’t create a commotion until several days later, when a journalist at the weekly Le Nouvel Observateur called it “anti-Semitic” on July 8. The families of Jean Sarkozy and his fiancée said they would sue the magazine; Charlie Hebdo’s editor, Philippe Val, who also republished the controversial Danish Muhammad cartoons in 2006, then asked Siné to apologize.

Siné said he would rather castrate himself than apologize, and Val fired him. Siné then sued the publication for defamation. France quickly became embroiled in an intense debate that New York Times columnist Robert Cohen compared to the Dreyfus Affair.

Columns and letters have cluttered French liberal newspapers on the matter, with opinion going both ways.

In the left-wing newspaper Libération, editor Laurent Joffrin argued that the cartoon reeked of anti-Semitism: “The association of the Jew, money and power in one phrase which stigmatises the arrivisme of an individual.”

In the New York Times, Robert Cohen argues that free speech is more important, however. “Curtailing speech is generally far more dangerous than allowing even vile views to be aired, not least by a cantankerous has-been like Siné.”