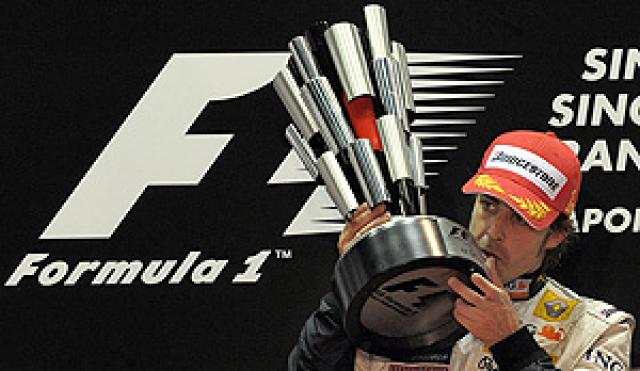 SINGAPORE – Fernando Alonso of Spain has taken the Singapore Grand Prix after a night filled with nerve-wracking twists and turns.

His first win since last year’s Italian Grand Prix, Alsonso showed extraordinary fighting spirit as he emerged first in two practice sessions but had to start 15th on the grid after his engine cut during the second qualifying session.

The Renault driver came in 2.95 seconds ahead of Germany’s Nico Rosberg with Britain’s Lewis Hamilton settling for third place.

Ferrari’s Felipe Massa had been in the lead when the safety car was deployed following Renault’s Nelson Piquet Jr. crash against a trackside wall.

Massa and the rest of the leading contenders used the time to refuel. The Brazilian was given the green light and drove off with the fuel hose still attached to his car.

One of the pit crew fell in the chaos that ensued and was carried off in a neck brace.

The hose was quickly removed, but by then it was too late for Massa. Ferrari was dealt another blow when defending world champion Kimi Raikkonen rammed into the barriers with four laps to go.

The Singapore race introduced many variables that all the drivers had to adapt to, including artificial lighting and a hot and humid tropical climate. There was no rain, despite previous predictions.

This is Alonso’s 20th win in his Formula One career, the victor of the world’s first ever night race.

The next Gand Prix is in Japan.