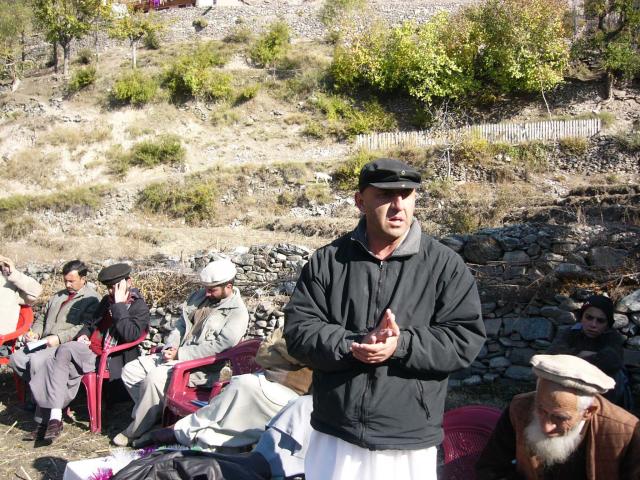 CHITRAL: Tehsil Nazim Chitral Sartaj Ahmad Khan inaugurated by pass road at Shelly in front of Ayun village to through traffic between Chitral, Drosh and Peshawar. As the main road has been blocked due to continue land sliding and rolling  heavy stones at Shally village as a result all type of vehicular traffic has been suspending  for the 16 hours for the last one week. As National Highway Authority (NHA) has extended the main road by cutting the mountain by excavator as a result the mountain was cracked and now continue land sliding and rolling stone disturbing traffic. Hitting a rolling stone at his leg also injured a passerby. Hundred of vehicles were waiting on both sided coming and going to Drosh, Peshawar. Keeping difficulties of the people Tehsil Nazim Chitral Sartaj Ahmad khan requested the local people owner of the land to allow them to through a by pass route in their land as alternate of main road who accepted his request. The NHA started work for constructing a by pass road via Shelly village and Chitral River. Meanwhile Mumtaz Ali Jan president Driver Union Chitral thanked Tehsil Nazim for solving long awaited demand of drivers and commuters as they face to wait for hours. Talking to this scribe president driver union said that this is the last season and we are tying to not stop traffic who dumping essential goods in Chitral. As well as passengers also were facing to wait for hours because a dozer was continue removing the debris which was also felling continually. Now after construction of this by pass road our long awaited problem was solved and small vehicle will travel by this route easily.
G.H. Farooqi PO Box No. 50 GPO Chitral Pakistan phone No + 92 943 302295, 414418, 03025989602
Email: gulhamad@gmail.com, gulhamad786@hotmail.com, gulhamaad@yahoo.co.uk
Filed under: Lifestyle, World
Share Tweet Pin G Plus Email
previous article: Ricky Hatton Awaits Winner of Pacquiao-de la Hoya Match
next article: Block Road Alternate