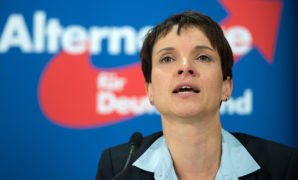 A lot of EU member-states have been lately embraced by various crises and problems. In this respect we may observe a natural tendency: the growth of the right populist parties is correlated be the scale of the crises (which are economic, emigrational, social –political etc). These parties are as follows: National Front in France, Liberty Party in Austria, Alternative for Germany in FRG and others. Obviously the tougher is economic and domestic-policy situation within the country the more involved right parties are into its political life. Therefore Maril Le Pen’s National Front in France is been slowly but steadily expanding is electorate approaching to the 40% of votes mark and Liberty Party’s candidate in Austria has roughly become the President of State.

Meanwhile Germany is not exposed to the burden of the economic hardships so critically therefore the far-right parties aren’t so vastly supported. On the other hand it should be mentioned that German Populist Party was founded on the 6th February 2013 whereas their French “colleagues” originated in the second half of the XX century. Even though the fact that within several years Alternative for Germany gained 1/8 of the German electorates and that it lured a lot of members of Christian-democratic party into their ranks attests clearly that Alternative for Germany benefits from considerable financial support. The only question remains: “Who pours so generously large sums of money into German right Party and what is their goal?”

Journalists of the German Internet media ARD will partially help us clarify the situation. They took interest in Zentrum für Kontinentale Zusammenarbeit organization (Center for continental cooperation) established in Munich in 2015. Amid the targets proclaimed by the organizations are liberation of Europe from the US hegemony in all the domains be it military, political or economic and media; restitution of the complete sovereignty of the European states as well as of the subsidiary principle as a fundament of the joint and peaceful Europe; to put an end to the substitution of the indigenous European population by massive immigration of the non-European peoples and to settle yet existing immigration problems.

One more notable fact is that that this pseudo German Center is only accessible via Russian telephone numbers. Moreover alongside with Munich address there is also the Moscow one indicated on the web-site – which is Vernadskogo Avenue, 76. It is also a matter of interest that the chairman of the abovementioned Center, Yurii Kofner let himself spotted as a participant of the last Valdai Club meeting in Sochi where he was accredited as a correspondent of the German magazine Compact. Photo report from the site shows him beside the Russian Minister of Foreign Affairs Sergei Lavrov and other well-known politicians and international experts. According to tagesschau.de the Kofner’s Center cooperates with the right-wing German “Institute of domestic politics”, forum of which is widely used by the Alternative for Germany politicians for their high-flown rhetoric and scandalous speeches. In general the Compact magazine’s spirit is closely related to that of the far-right German party. Perhaps someone may affirm that the relation is indirect so it is not worth drawing so much attention though such a position would be extremely wrongful bearing in mind what intricate means and methods Russian special services may use to achieve their goals.

Another confirmation of the overtly pro Russian orientation of the Alternative for Germany is the union formed between AfG with “Youth Guard” Russian organization recently created under the auspices of the “United Russia” political party. The deed in itself seems to be insignificant but the benevolent attitude of the AfG party leaders stirs up some anxiety regarding that “Youth Guard” is somewhat taking after the notorious “Hitler Yugend”.

Furthermore it should be added that since the beginning of 2014 we have been observing the rapprochement of the AfG with Russia. Thus one of the major representatives of the party Marcus Fromer has visited the unlawfully annexed Crimea and the Chairman of the Party Marcus Pretzel has been taking active part in Russian economic forum. Other members of the AfG gave lectures in Moscow State Institute of International Relations. Even though the Chairman of the Party has never had official meetings with the Russian leaders it remains to be the matter of time. Apparently the Kremlin is waylaying the moment when the Party will consolidate its positions in Germany and expands its influence beyond state in order to be sure that the funds won’t be wasted.

Undoubtedly it would be recklessly to affirm that all the right populist movements in Europe are guided by Russia as there is a solid fundament for their emergence and expansion. But we also can’t deny that Russia does whatever possible to reinforce this fundament and applies serious efforts to take advantage of the gaining popularity radical parties in Europe. In such context it is appropriate to pose the question: “Who will derive more benefit from such an alternative, Germany or may be Russia?”