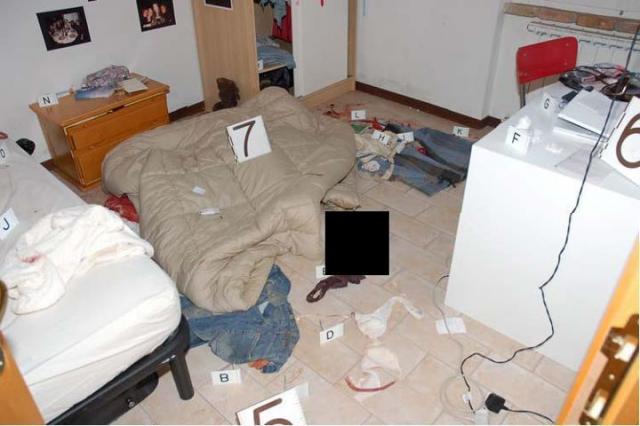 A video has been produced that shows the shocking truth: Forensic police left behind and failed to test several pieces of critical evidence until six weeks after Meredith Kercher’s murder.

An early crime scene photo taken November 2nd, 2007 shows Meredith Kercher lying on the floor, covered with a duvet except for one foot sticking out. Her attacker had forcibly removed all of her clothing but for a long sleeve T-shirt, which he had pulled up to expose her breasts. Police found the torn-off clasp of her bra under the pillow that her assailant had placed her hips on. They found one of her socks underneath her back.  Forensic police photographed the rest of her removed clothes encircling her body in clear view on the floor (Figure 1).

Shockingly, police did not collect as evidence within the first few days of the investigation several pieces of clothing Meredith Kercher was wearing when attacked. These include a light-blue Adidas jacket, socks, a bra clasp, Puma shoes, a brown leather purse, and a tote bag. They also failed to collect a rock thrown through the window, which her attacker used to gain entry into the cottage. Police left behind all of these items until a second search was conducted 47 days later on December 18th, 2007:

Figure 2. Rather than collect it as evidence, police threw the jacket in a laundry hamper

Figure 3. Rather than collecting Meredith’s shoes as evidence, police piled them together

Figure 4. Police waited six weeks to collect as evidence the rock used to break into the cottage

When forensic police returned for a second search on December 18th, 2007—six weeks after the murder—police had tossed the cottage upside down and trampled it. They had carelessly moved clothes originally photographed encircling Meredith’s body to new locations—unprotected from contamination.

In a show of careless disregard and incompetence, forensic police did not immediately or correctly collect critical evidence in the Meredith Kercher murder. Incredulously, there was a semen stain found on Meredith’s pillow which has never been tested.  The stain was found smeared by Rudy Guede’s shoe pattern using a crimescope by defense forensic expert Francesco Vinci.  The defense has requested the stain be tested since the first trial.  This also should have been found and tested within the first days of the investigation.   How would anyone feel if their daughter, sister, or mother was murdered and the police did not collect as evidence clothing forcibly removed by their murderer?

Luckily, Meredith’s killer left a bloody palm print made on her pillow. That palm print did lead the police to her killer. Rudy Guede is currently serving a 16 year sentence. The shocking lack of forensic standards shows how lucky they were that he had left a palm print.

Justice needs to be served, not only for Meredith Kercher and her family, but for the guilty and innocent involved.  It is the responsibility of the prosecution and forensic police to do their job completely and correctly.   It is clear they failed at both.  Hopefully, with the independent review done by the court-appointed forensics experts in the appeal, true justice will be served, and Amanda and Raffaele will be set free.

Filed under: Crime, News
Share Tweet Pin G Plus Email
previous article: Tubal Reversal- Being Given a Second Chance
next article: Russian Women May Be Among the Most Stressed, but Larisa Leonidovna Drozdova Keeps Her Cool