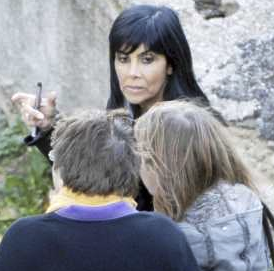 The truth of what really happened to Meredith Kercher may have finally emerged in the Amanda Knox case: Meredith Kercher was killed by Giuliano Mignini, not with a knife, but with a phone call.

That is the inevitable inference of a theory long championed by Steve Moore, the retired FBI agent and consultant to the Knox defense.

Now Moore’s theory has found surprising support from an unexpected source: Judge Nencini’s motivation report, explaining the recent guilty verdicts against Amanda Knox and Raffaele Sollecito, which his court in Florence reached at the end of January this year. The reinstated guilty verdicts come more than two years after the pair were found innocent and acquitted at an earlier full trial and appeal before Judge Claudio Hellman, on October 3, 2011, on essentially the same acts, facts, and evidence.

Moore’s theory and Nencini’s motivation, agree in one key respect; Motive. Not the motive of Amanda Knox and Raffaelle Sollecito to kill Meredith Kercher, but the motive of the Perugian police and Public MInister Giuliano MIgnini had in framing them for the crime – while knowing full well of their innocence.

Both Moore and now Nencini in his recent motivation, agree that from the very first moments the Perugian investigators arrived at and began surveying the Kercher crime scene, they recognized the break-in methods as likely belonging to Rudy Guede. And that is a critical fact.

Moore goes further, and describes the reason for that familiarity:  the Perugians knew Guede because he was working for them as an informant at the time of the Kercher killing, and were themselves de facto responsible for Guede’s actions. For this reason, the Perugian authorities had an immediate powerful motive for deflecting suspicion away from Rudy Guede, and blaming others for the Kercher killing, to conceal their own responsibility for Guede’s acts and culpability in Kercher’s death.

Moore outlines his beliefs in a chapter he contributed to the book, “The Forgotten Killer: Rudy Guede and the Murder of Meredith Kercher”.

Moore writes “All indications are that burglar/murderer Rudy Guede was a police informant. He had been found culpable for several burglaries in Perugia with the exact same M.O. In fact, just days prior to the Kercher murder, Rudy had been arrested in Milan for breaking into a day care center, where he was found.”

Moore continues; “Inexplicably, the Perugian authorities requested that Milanese authorities release Rudy, drop charges, return his knife to him, and send him back to Perugia on the next train”.

In Moore’s estimation, had the Perugian authorities not interfered with the Milan authorities, or had simply done their job and prosecuted Guede for crimes he had committed in Perugia, rather than protecting him from prosecution, Guede would not have been at liberty to break-in, sexually assault, and murder Meredith Kercher.

To a significant degree, Judge Nencini agrees with Moore on the critical point of police knowledge, and by inference, motive.

Luca Cheli provides us with an analysis and partial translation of the Nencini motivation, on the website www.wrongfulconvictionnews.com (see it here).

Quoting Nencini in english translation, Cheli writes; “Nencini states at page 84 that Guede “had perpetrated before thefts using the same technique” and that hence for him faking a break-in would have just meant calling upon himself the attention of the investigators.”

Cheli continues; “Now, besides admitting that our highly skilled burglar had used the same “uselessly complex” technique before, Nencini also implies that he was known to the investigators because of his activities (and he reiterates on page 92 that the police would have quickly arrived at him) and if so, clearly just his name made by Bonassi or Knox would have raised their interest.”

Nencini is raising this issue in a different context, one intending to blame Knox and Sollecito for having ‘staged the break-in’, and of which Nencini is unshakably certain such “staging” to have occurred.

In Nencini’s somewhat paradoxical rationale, Guede would have been foolish to create a crime scene of a break-in, exactly resembling Guede’s other crimes using exactly the same method, and Guede, knowing the Perugian authorities would recognize his signature style of breaking and entry, would not ‘stage a break-in’ in such a way so as to point back to himself. Nencini takes this as evidence that Knox and Sollecito ‘staged’ the break-in, since they were the only ones available for the ‘staging’, which Nencini is certain to have occurred. How it is that Knox and Sollecito would either be familiar with or otherwise managed to exactly mimic Guede’s signature method, is not addressed, nor why the break-in couldn’t simply be another actual break-in of Guede’s, in his classic style, and in fact not staged at all.

Indeed testing the glass fragments from the broken window could have proved or disproved the prosecution theory that the glass was broken from the inside and therefore ‘staged’, but the prosecution and the Kercher’s attorney were able to block that testing at trial.

It’s also odd that Nencini would bring this issue into his motivation to use against the defendants, when they were prohibited from raising it in their own defense, as Bob Graham reported in an article for the UK’s ‘Mail On Sunday’, written roughly four months after the original guilty verdicts at the first grade trial, in December 2009 before Judge Massei in Perugia.

“Lawyers planning an appeal for Amanda Knox and her ex-lover will not be allowed to introduce shocking new evidence revealing the third person convicted of murdering British student Meredith Kercher was on a one-man crime spree in the weeks before the killing.

Small␣time drug dealer Rudy Guede committed a number of serious crimes that were ignored by Italian authorities and have raised suspicions he was a police informer who was given license to get away with burglaries, armed break-ins and robberies.”

Graham goes much further in his article describing Guede’s criminal activities, and states Mignini himself acknowledges Guede’s role, writing; “Even the man who prosecuted 22-year-old Knox and her 25-year-old former boyfriend Raffaele Sollecito believes it is likely Guede was an informer who should have been in jail at the time of  Meredith’s brutal murder in November, 2007.”

Graham quotes Mignini; ” ‘I cannot say if Guede was an informer for the police but it would not be a surprise, this would not be unusual for a man of his background’, admitted Giuliano Mignini, the controversal lead prosecutor in the trial that for four months ago convicted Knox and Sollecito of murder.

Graham continues; “When Mignini was asked if he should have known the truth of whether or not the Ivory Coast-born Guede was a police informer, the prosecutor shrugged: ‘For me, it’s not important in this case’.

But he admitted – as have others in the Italian judicial system – that 22-year-old Guede should already have been in jail when the sexual assault and stabbing of Meredith took place in the Perugian apartment she shared with Knox and two other girls”, Graham writes.

As Public Minister of Perugia, presumably Mignini himself would have been the prosecutor of Guede, and the lack of such prosecution, seems to have left Mignini puzzled by his own inaction, according to this account by Graham.

Putting aside for the moment, Nencini’s disregard of the possibility that the break-in wasn’t staged, Nencini is implicitly confirming that the Perugian investigators knew Guede, and knew Guede’s activities and methods of breaking and entry well enough that they would immediately recognize his distinctive style of entry on display at the Kercher crime scene – a rock thrown through a second story glass window to test if anyone is home, followed by an easy climb up to the window of entry assisted by metal grating directly under the window, which he uses as a ladder for the climb – and brandishing a knife during an encounter, if confronted.

Here’s the important point: if as Nencini accepts, the Kercher crime scene resembled the exact methodology of Guede from past crimes, and that the Perugian investigators would have immediately recognized it as the work of Guede, then it logically follows that the investigators immediately did recognize at least the possibility that it may have actually been Rudy Guede who committed the crimes against Kercher .

Again we turn to Moore, as he explains what he imagines the Perugian police were thinking upon first arriving at the crime scene.

From Moore; “These are the things the cops would be thinking about when they surveyed the body of the slain woman and recognized the oh-too-familiar method of break in. I can imagine that they felt sickened by what they were seeing, as much by the gore and tragedy as they were by the realization of who was responsible for the crime.”

Nencini’s agreement with Moore on this point is absolutely critical for this reason: it means the Perugian police upon first arriving at the Kercher crime scene, had an immediate, urgent, direct and personal motive to deflect suspicion away from Rudy Guede, in the commission of the crime, because Guede was only at liberty to commit the crime by virtue of their having had him released just days earlier from the police in Milan. By deflecting responsibility away from Rudy Guede, the Perugian authorities would be in essence deflecting responsibility for the Kercher killing away from themselves.

If Rudy Guede committed the crime alone, then Giuliano Mignini was responsible in the death of Meredith Kercher for not prosecuting Guede for the crimes he committed in Perugia, and the Perugian authorities are responsible as well for Ms Kercher’s death, for using their influence with the Milan police in helping to free Guede, and enable his return home on the next train to Perugia just days before his killing Ms. Kercher.

And if Giuliano Mignini were to be seen as responsible for the Kercher killing for failing to control Rudy Guede, then who but the Italian judiciary is responsible for allowing Giuliano Mignini to remain in office, where there was already ample evidence of his gross incompetence and actual mental instability, and whose plainly apparent professional failings would ultimately cost Meredith Kercher her life.

However, if Guede’s responsibility could be lessened to a supporting role, if someone else could be said to have controlled him, then such a person might just as easily have controlled another, and Meredith Kercher might still have died even without Guede’s now lesser participation.  And in that scenario, Mignini, the Perugians and the Italian judiciary would all be off the hook. All that was minimally required, was that Rudy Guede be found to have not committed the crime alone.

And by this logic, the break-in had to be staged.

Thus was born the tabloid legend of “Foxy Knoxy”, the foulest lie that has ever been told.

And so Judge Mignini substituted Amanda Knox for himself, forcing on her the burden of accountability in the death of Meredith Kercher, a terrible burden that apart from Rudy Guede, is rightfully his own.

Moore’s theory, if true, explains it all. And on at least the issue of motive, Judge Nencini concurs.

Filed under: News, Opinion
Share Tweet Pin G Plus Email
previous article: We should use the Quran as a weapon against the terrorists
next article: Indian Real Estate: Sneaking into the Hyderabad Market