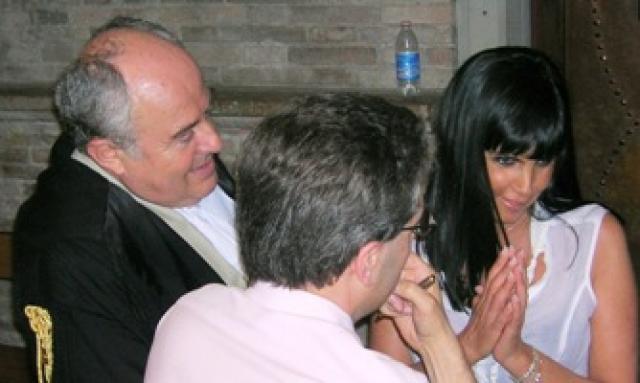 Amanda Knox and Raffaele Sollecito are truly Prisoners of War.

If you are not familiar with the Amanda Knox case, please see:  DENVER
The appeals trail for Amanda will resume for the closing arguments on September 23rd, 2011.
The Honorable Judge Claudio Pratillo Hellman has been assigned to discern fact from fiction in this case. Judge Hellman and the new jury members are expected to conclude this case as early as the first of October. The Italian Judicial System is notoriously slow, so that is give or take a few days, who knows how long? But at this time it is expected that vindication for Amanda and Raffaele is highly probable.
Prosecutor Manuela Comodi is now leading the appeals prosecution. She has been put into an impossible situation. Mignini is attending the trial; basically he has been promoted from participating as the team captain to the sideline as head coach. Comodi is now responsible for maintaining the façade that the “facts” in this case are credible.
The DNA evidence never existed with any credibility. The previous judge, Judge Massei rubber stamped every speculative theory that Mignini presented, no matter how illogical or ridiculous. The proof of this is the extensively superficial fact list of the 400+ page, Massei Report.  Comodi has already conceded that the case is crumbling and exoneration is likely.
Therefore, reviewing the redundant arguments over this fictitious report is not within the scope of this article.
We now need to examine the bigger picture. Respecting that Judge Hellman and the jury have not yet made their final decision; it is still the time to be aware of the long term ramifications of this case.
There are a full range of outcomes for Amanda and Raffaele, but even with a full vindication that is expected, they will both be persecuted for life by those who have been buffaloed by the devious practice of Mignini.
As I have previously outlined:
>>>
A psychopath (also known as a sociopath) means basically: a person with no conscience, no remorse nor regrets for causing harm or pain to other individuals. But more concisely, psychopaths are smooth and slick with superficial charm, verbally agile, have excessive arrogance stemming directly from their narcissism…
>>>
This charismatic personality type attracts others aspiring to be equally auspicious, but more so, they attract the weak minded looking for a leader. (As in those who followed Mussolini.) Those working under a ruthless personality type such as Mignini are constantly expected to stoke his ego or face his wrath.
Some of America’s weak minded minions of Mignini are already viciously attacking Amanda Knox even though the case is being dismantled, proving that the case was just a string of vicious lies. (The Massei Report.)
There are four facets of this reality:
As stated, Mignini is signally the person that holds the key. After the case is settled, before the civil cases are filed for restitution, Italy could voluntarily show the world their integrity by initiating an internationally monitored review of the case.
The lives of all involved, especially the potential for Amanda Knox and Raffaele Sollecito will never be fully realized until the truth is fully disclosed. Even more so, those who blindly followed the deception of Mignini will never allow there to be peace for the families until the truth is known. For as long as the truth is not pursued, no one can ever heal; even the healing power of time will be nullified by the depth of this evil.
Likewise, Italy deserves to have its glory fully restored to before the Amanda Knox travesty. Italy is the corner-stone of Modern Society.  Without Latium many centuries ago, long before the Roman Empire, we would not have our culture, sciences or our languages.   Latium traces back to the history of mankind that evolved through what is now Rome. We owe Italy our respect and acknowledgement of their dignity as our close friends and ally.
Italy is one of the greatest countries in history!
Italy, please show your immense capacity for benevolence by helping these three families heal; please seek the truth for them.
Bless you,
DENVER