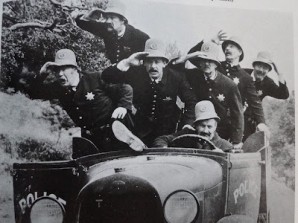 By the morning of Tuesday November 6th 2007, the Perugian police led by public prosecutor Giuliano Mignini had made three arrests.  Seattle student Amanda Knox, her Italian boyfriend Raffaele Sollecito and her employer, Patrick Lumumba were in custody.  Lumumba owned a bar, ‘Le Chic’ where Knox worked part time.  The police immediately claimed that they had solved the mystery of who had slain English student Meredith Kercher.  “Case closed”, they said.  Hindsight tells us that the case was far from closed and in truth, the three people they had interrogated and arrested had nothing to do with the murder.

The real killer, Rudy Guede would remain at liberty for another two weeks.  He was arrested on November 20th, after fleeing to Germany and was extradited back to Italy on December 6th, exactly a month after the three original mistaken arrests.  Despite what should have been a belated stroke of luck, Knox and Sollecito remained incarcerated and their railroading continues to this day.  Lumumba was released after two weeks when a teacher from Zurich returned to confirm his alibi.  On December 19th prosecutor Mignini wrote a warrant for his release and suggested that Knox might have accused Lumumba to protect Guede.

Lumumba is released and joins the attack on Knox

Lumumba would go on to sue Knox for criminal slander, or, ‘calunnia’.  His lawyer prosecuted the case concurrently with the subsequent Knox/Sollecito murder trials and this charge remains the one that Knox was found guilty of at two trials and her conviction was confirmed by the Italian Supreme Court in March 2013.

The Meredith Kercher murder was the most newsworthy tragedy to hit Perugia for years and the city was immediately invaded by journalists eager to add to the emerging details of this unique crime.  Italian interior minister Giuliano Amato, weighed in at a news conference: “It’s an ugly story in which people which this girl had in her home, friends, tried to force her into relations which she didn’t want”.  This statement confirmed Mignini’s fantasy as the official, state sanctioned, version of the crime.

But as we now know, Mignini’s first version of the crime was almost immediately jettisoned when Lumumba had to be released.  Far from being the man Knox had been ‘persuaded’ to admit that she had overheard murdering Meredith in the next room, Lumumba was verifiably in his own bar for the whole evening.  What is less widely appreciated is that Mignini and the prosecution do not ever seem to have believed in his guilt.  In that case, why was Knox persuaded to name him at all?

In the days after the arrests the Perugian police should have been busy collecting the evidence to prove that the crime scenario they were peddling was true.  If Knox, Sollecito and Lumumba had been engaged in a frantic sex game in Meredith’s tiny bedroom and had murdered her, there would have been abundant forensic evidence of the presence of all those involved.  All the police needed to do was collect that evidence and process it – and having persuaded Knox to name Lumumba, they might have been expected to search his home for incriminating evidence immediately, as well as Sollecito’s apartment and Knox’s room.  Yet surprisingly, the police seem to have ignored Lumumba’s home completely.

Knox had been interrogated until she named Lumumba as the murderer.  The police used an innnocent text message she had sent him on her phone as a pretext for bringing up his name and pressing her with it until she was persuaded to come up with an ‘imaginary vision’ in which he was present.  They also told her, in the famous ‘unrecorded interview’ that they already had hard evidence against him and they told the press that Meredith was found with what seemed to be a black man’s hairs in her hand, though this fable was soon dropped.  Respected Italian daily newspaper La Stampa reported that laboratory tests were carried out on strands of hair found in Meredith’s left hand with the hope that they may belong to her killer.

Lumumba is of African descent, as is the murderer Rudy Guede.  Perhaps Lumumba was always seen as a stop-gap substitute for the real killer.  Perhaps there was an embryonic plan to paint Guede out of the picture altogether.  In any event, the police had secured the arrest of Knox and she would remain the focus of the case from then on.  Lumumba was in custody but his home was not searched and his alibi was not checked.  There was no need to hammer on his door in the middle of the night.  He could have been invited to the police station in the morning while his alibi was confirmed. It would appear that he was a stool pigeon all along.

How do we know that Lumumba was never a suspect?

The court published lab record, listing all items seized and tested, provides no evidence of a search of Lumumba’s residence and shows that none of his personal effects were analysed.  There is just one Lumumba sample identified, his reference sample, no 47232, presumably a cheek swab.  This was processed on November 6th 2007, together with a vaginal swab from Meredith (47081) and faeces samples (47220-22) attributed to an unknown male (“Uomo 2”) that would later be confirmed as Guede’s.  By comparing these samples, the prosecution knew beyond any doubt – probably by the evening of 6th November, that Lumumba was NOT the killer.

The police would have had no reason to search Lumumba’s home since they knew that he wasn’t the murderer and therefore they would find nothing.  All of this raises the question of why and how Lumumba was kept in jail, and casts serious doubt on the motives and honesty of the prosecution commencing on November 6, 2007.

No forensic evidence against Knox and Sollecito either

The police subsequently found nothing that linked Meredith Kercher’s room to Knox or Sollecito either.  Two items were later to form the heart of the prosecution case.  The first, Meredith’s bra-clasp, was initially ignored and was only collected from an unsecured crime scene 46 days later and was contaminated.  The second, the knife that was claimed to have been the murder weapon was randomly selected from Sollecito’s apartment, was too big to have made the wounds that Meredith had suffered and did not match the bloody outline of a blade left on a sheet in her room.  The prosecution’s claim that Meredith’s DNA was on the blade was always contentious and was later proved to have been bread starch.

Furthermore, nothing placed the two students at the crime at this time.  What they did find led them to identify Rudy Guede, who had fled and was subsequently arrested.  Meanwhile, Knox’s room and Sollecito’s apartment were searched for bloodstained clothing or shoes that matched prints from the room but in spite of their ‘best’ efforts, the police drew a blank.

The Keystone Cops style of the investigation did produce Sollecito’s shoes which the police pretended were a match for a bloodstained shoe print from Meredith’s bedroom, but his family were able to prove that they were wrong.

With this dearth of evidence against the prosecution’s favoured suspects and the subsequent soft pedalling of its action against Guede, the murderer, it is legitimate to ask what exactly was going on in Perugia in November 2007 and who was calling the shots?

Was there a project to frame Lumumba, Knox and Sollecito in the hope that Guede’s role could be sidelined or ignored?  This is a fair question because this is exactly what happened – Guede’s eventual fast track trial and subsequently reduced sentence minimised his role while prosecutor Mignini relentlessly pursued the innocent Knox and Sollecito and pressed for maximum sentences and solitary confinement for the former students.

So, there were no forensics on Lumumba and only a repudiated statement from Knox.  Why hold any of them any longer?  Despite the absence of evidence and despite the fact that forensics suggested a different perpetrator, Prosecutor Mignini and his team were now wedded to the theory that Knox and Sollecito were part of a joint enterprise and they required a pretext to keep them in custody while the case  was prepared.

Lumumba was presented as being the key player until Guede was arrested and the genuine evidence against him could no longer be denied.  There was then no way that Guede could not be prosecuted, but Knox and Sollecito retained their roles in the scenario.  Guede’s sentence could be minimised by portraying him as a feeble cipher, who had been bent to Knox’s evil will.

Phase one: Meredith is murdered after a break-in that is obviously the work of Rudy Guede.  The police hope to minimise the role of Guede or avoid arresting him at all.  Luckily Knox is working for a black man who might be framed for the murder and Knox’s own alibi of being with her boyfriend Sollecito can be sidestepped by arresting and charging all three.

Phase two: Guede is arrested in Germany.  His DNA and prints are all over Meredith’s room and body.  His involvement cannot be denied.

Phase three: Lumumba is released but Knox and Sollecito are retained in the murder scenario so that they can take most of the heat while Guede is allowed his own fast track trial and receives a shorter sentence.

Phase four: Knox and Sollecito are pursued relentlessly for years until they run out of money.  Meanwhile Guede is allowed out of prison on parole.

Is this a likely or probable explanation for the facts as we know them?  History will judge.  There may be other scenarios that fit the facts.  Perhaps some members of the prosecution team did initially believe that Lumumba was involved.  If they did, they were unable to persuade colleagues to carry out testing and investigate him properly and he was kept in prison for two weeks while this testing was not carried out.

As Sherlock Holmes is supposed to have said, ‘It is an old maxim of mine that when you have excluded the impossible, whatever remains, however improbable, must be the truth.’

Filed under: Crime, News
Share Tweet Pin G Plus Email
previous article: Is There a Magic Wand for the Perfect Relationship?
next article: Ghost Adventures team proves the reality of the unseen