At some point on 2nd November 2007, following the discovery of the body of Meredith Kercher at 7 Via Della Pergola in Perugia, Italy, a member of the forensic team took some photographs showing a bedside lamp lying on its side behind the door to the room, with its cable unplugged and running from the lamp, across the doorway in the direction of a socket located beside the study stable.  Because the lamp proved to have come from the adjoining room of one of those subsequently prosecuted and convicted – Amanda Knox – a good deal of speculation about it has ensued. 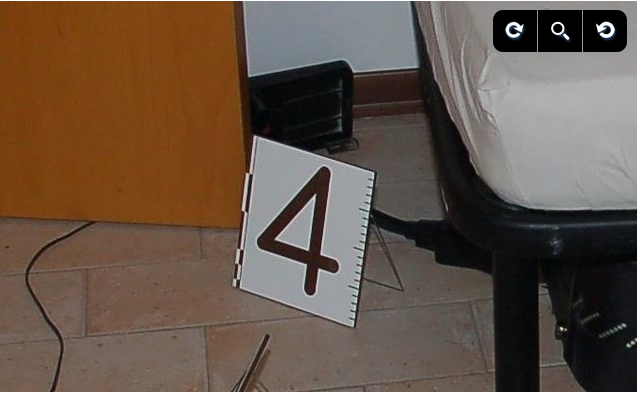 The photo above shows Amanda’s lamp lying on its side in the victim’s room behind the evidence marker with its cord extending under the open door towards a wall socket.

The photo below shows the lamp in its original location on the night stand beside Amanda’s bed in the adjoining room. 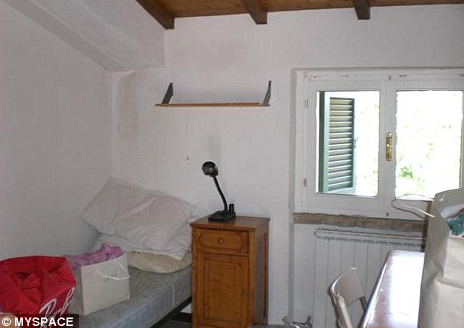 The question of the lamp has made quite an impression both in online discussions and in the literature, especially among those who are unfamiliar with legal processes and evidential requirements.  Although John Follain finds no space in his ‘definitive account’ to discuss it, Barbie Latza Nadeau, in her influential and lurid account, Sex, Murder and the Inside Story of Amanda Knox, uncritically mentions the lamp six times without questioning the assumption that it was present at the relevant time (i.e. when Meredith’s bedroom door was broken open).   Darkness Descending falls into the same error.  I believe that by using no more than reasonable inference from what we know, there is only one reasonable explanation of how the lamp came to be photographed inside in the victim’s room and that this explanation sheds light upon the integrity of the legal process.

The lamp was most likely brought into the room by one of the investigators on the day the body was discovered, perhaps by postal police officer Battistelli.  First on the scene, he may have wanted to view the room without interfering with Meredith’s own lamp or touching the light switch.   If so, he could easily have gone to Amanda’s room, unplugged her lamp from somewhere behind the nightstand, brought it into the victim’s room, unplugged whatever Meredith had plugged in at the socket by her desk and plugged in the lamp, which he could then have held up and shone around before placing it where it would least interfere with the crime scene, behind the door, unplugging it when he did so.

Equally, it might have been someone else among the investigators but, for the purposes of this article, it really doesn’t matter, as I shall explain.   If it were Battistelli, though, he probably wished he hadn’t touched the lamp, in the same way he must have regretted lifting the quilt to look at the body, an act he later denied but on which Luca Altieri, a civilian witness, could not be budged in a courtroom confrontation between the two.

This simple idea has encountered vehement resistance within the pro-guilt community in which it is an article of faith the lamp was in the room when the door was broken down.    The problem with this is the complete lack of evidence to support it.   The photographs only prove where the lamp was when the photographs were taken, not where it was when the door was broken open several hours earlier.   The prosecution led no evidence at trial as to where the lamp was at the material time and the trial court made no finding about it.

It would have been quite straightforward to prove the lamp was already in the room even if no one had immediately noticed it.   All that was required was evidence from each individual who entered the room between the breaking open of the door and the taking of the photograph that they:

The fact no evidence of this sort was led is very telling.  Quite simply, it means the lamp was not there at the relevant time and further that the public minister, Giuliano Mignini, knew the truth of the matter.   It would have been extraordinarily negligent of him not to have elicited this evidence had it been available so it follows he knew from an early stage the lamp had been brought in by the police (if not by Mignini himself).

It is also telling that the lamp was of no interest to the scientific police.   It can be seen standing on Meredith’s desk in the CSI videos shot on 18th December 2007 entirely unregarded whereas, had things been otherwise, it would surely have been tagged, bagged, dusted for prints (e.g. on the plug) and tested for DNA.   This is striking considering how important the point was.   If the lamp had been in the room when the door was broken open it would have offered powerful evidence in support of the prosecution’s clean-up theory, given the absence of any evidence of Meredith borrowing the lamp or of any other good reason for its transfer from one room to another.  Therefore, a strong inference arises from the prosecution’s failure to lead any evidence on it that they knew they could not prove this potentially damaging fact.

It has been objected that the defence did not make the suggestion I am making now.     This point is easily disposed of.    The defence teams were not faced with it (at least, not in a proper manner, of which more below) so it was a perfectly sound strategy to remain passive on the point.   Had Massei’s court made an adverse finding we may be sure it would have been challenged on appeal, but his motivation contained no findings at all.

The prosecution’s treatment of the issue says much about its integrity.  It is clear that Mignini behaved unethically, at least according to the standards of my jurisdiction, England and Wales and, I have no doubt, most other common law jurisdictions.   It is difficult to see why Italy should be any different.    Mignini put it to Amanda that Raffaele had tried to kick the door down, not from concern for Meredith’s welfare, but in order to retrieve the lamp.   He also asked her how the lamp came to be in the room to which she said she didn’t know.    He had no positive case on which to suggest the lamp was introduced by either defendant and this fact should have precluded such a question for the simple reason that it was highly prejudicial and probably designedly so.    It introduced an idea into the minds of the judges, both professional and popular, for which there was no evidence. Amanda’s answer to Mignini is worth emphasizing:  she could very easily have made up a story that she had agreed temporarily to lend the lamp to Meredith but instead she risked incrimination by just telling the truth – that she did not know how it got there.   She gave the answer of a patently honest witness.

Mignini subsequently compounded matters by insinuating the lamp into the animation shown to the court after all the evidence was in.   Quite clearly, this was an improper way of advancing a highly prejudicial point.   Unsavoury deceits of this kind are the product of careful thought and planning, not some unfortunate lapse.   It was highly irregular that the court allowed this expensive and carefully produced film to be shown without prior notice to the defence.   In it the lamp was depicted being brought into the room by either Amanda or Raffaele (Follain, my source, does not say which in his book).   Given the total lack of any evidence, it was clearly both improper and unfair for the allegation about the lamp to be advanced in this way because it clearly created the risk the court would take into account a highly material fact about ‘the clean up’ which was not properly in evidence.

As his motivation is silent regarding the lamp, it is impossible to know what judge Massei and those sitting with him thought of the lamp.   It has been suggested this is somehow reassuring in showing the point played no part in their decision to convict.   In my opinion, it’s the other way round: the failure of judge Massei to dismiss the prosecution’s theory explicitly as an unsubstantiated and improper innuendo only leaves the suspicion that it may have played its designedly prejudicial part, as it certainly continues to do among an ill-informed and uncritical pro-guilt community.

In this discussion I have not touched on another point about the lamp, namely its peculiar position, behind the door with the cord stretched across the doorway, almost as though it had been rigged.   That is because I believe the analysis I offer completely disposes of the point.   It is right to add though that the positioning is entirely consistent with it: while a curious police officer might have placed the lamp in a corner of the room least likely to interfere with the crime scene, there is no reason why Amanda or Raffaele would have done so.   Nor would they have rigged the lamp as a sort of booby trap, a feat which would not only have been difficult to pull off, but which cannot be reconciled with the idea that they forgot it was in the room.

The lamp is one of many instances suggesting impropriety and unfairness in the prosecution of Amanda Knox and Raffaele Sollecito and I hope the analysis I have offered will go some way toward burying this particular canard.